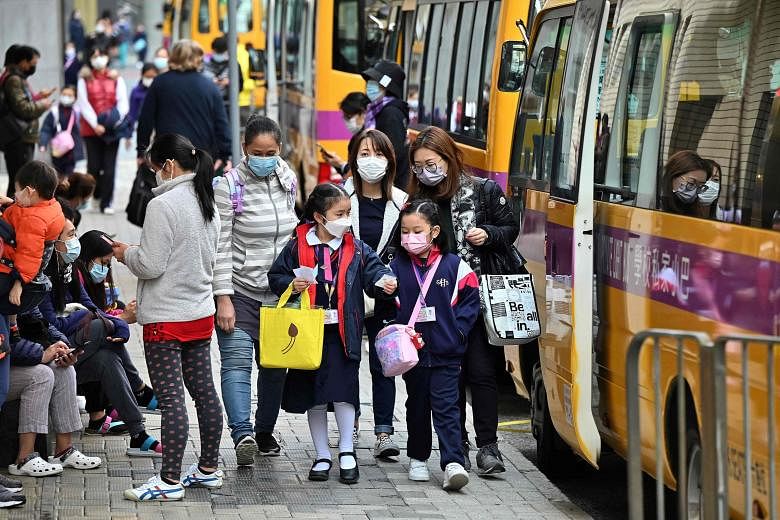 HONG KONG (REUTERS) – Hong Kong parents rushed children as young as 3 years old to vaccination centres this week as the government lowered the age limit for the shots and the deaths of two toddlers exacerbated concerns in a city struggling to cope with a Covid-19 surge.

The government approved children 3 and older to take China’s Sinovac vaccine from Feb 15, while those 5 and older can take the BioNTech shot.

The measures come as the Chinese territory has recorded a 60-fold surge in infections since Feb 1, overwhelming the global financial centre’s hospitals and testing facilities.

A 3-year-old and 4-year-old, both diagnosed with coronavirus, died in the past week. Authorities said they were “saddened” by the deaths and would offer assistance to the children’s’ families.

At a vaccination centre in the northern New Territories district on Friday (Feb 18), long queues formed early in the morning, with parents and children braving wet and windy weather before being allowed inside for vaccinations.

Dozens of children were bundled up in jackets, some clutching their parents as they stood in line. All wore masks, while some also had plastic face shields.

“I was extremely worried when I heard the news that a 3-year old and 4-year-old had died. So I immediately made an appointment,” Ms Yoki Tsang said as she waited outside the centre with her two boys, aged 3 and 5. “It’s heartbreaking to hear the child passed away like this.”

The rush to get children vaccinated comes as the city’s hospitals are overflowing, with elderly and children on beds in cold and rainy parking lots. Isolation facilities are full, while thousands queue for hours outside testing venues.

China’s president Xi Jinping this week told Hong Kong’s leaders to control the outbreak as its top priority, with the mainland ramping up to help Hong Kong with testing and building of isolation facilities.

Some parents have pushed for their children to be isolated at home rather than sent to a hospital or a government quarantine facility because of the difficulty of caring for them and the emotional toll from being separated.