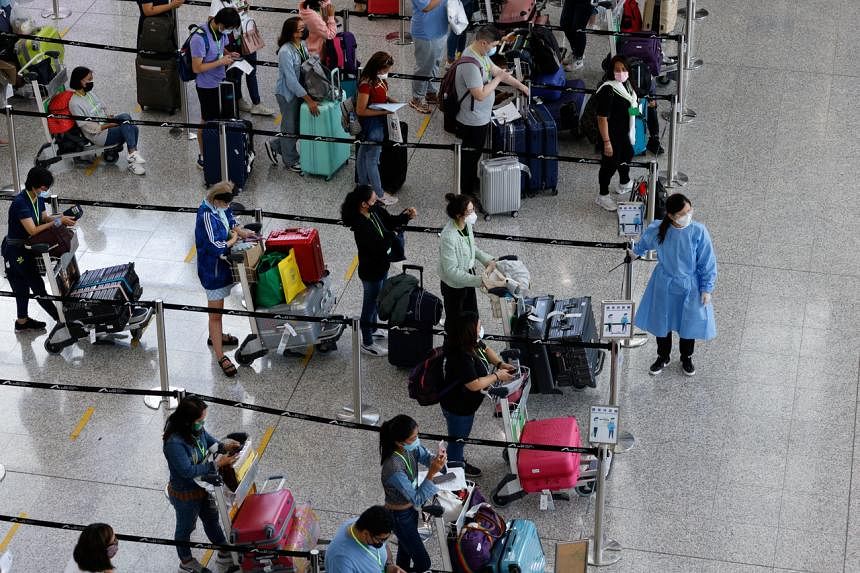 HONG KONG – Anticipation is mounting that Hong Kong will scrap hotel quarantine for inbound travellers, with an announcement possible in the coming days, as the city tries to maintain its status as a global financial hub amid a Covid-19- induced economic slowdown and brain drain.

The government could start disclosing details about the easing by the end of September, said Mr Michael Tien, a National People’s Congress deputy and city lawmaker, citing his understanding from discussions with officials.

The new policy could take effect by mid-October, he said in a phone interview.

Mr Tien’s timeline echoes accounts that have been widely circulated in the local news and on social media.

A Hong Kong Economic Times report on Thursday also said word on the latest reopening moves could come as soon as next week, citing unidentified people.

Authorities plan to remove the three-day hotel quarantine period and end a requirement that travellers get a negative PCR test result 48 hours or less before arriving in the city, local media including HKET, Oriental Daily and Sing Tao Daily reported.

Instead, travellers may need to spend as many as seven days after arrival undergoing so-called health surveillance, where they can move throughout the city but will be barred from entering high-risk venues such as restaurants and bars, according to the media.

A laboratory-confirmed PCR test will still be required upon arrival, they reported.

Hong Kong is facing increasing pressure to relax its travel rules, which remain among the world’s toughest even after a series of easing measures.

The curbs, designed to align with China’s zero-Covid-19 policy, left the city isolated from the rest of the world and battered its economy.

Further reductions are widely expected ahead of major events designed to boost the financial centre’s global image, including a high-profile banking summit and the iconic Rugby Sevens tournament in November.

Chief Executive John Lee said Tuesday that he wants to relax policies including mandatory hotel quarantine that have kept travellers away.

The easing would come at a time when infections in are decline, falling to about 6,000 a day from more than 10,000 earlier this month. Most are found in the local community, with only 146 traveller cases reported on Wednesday. BLOOMBERG