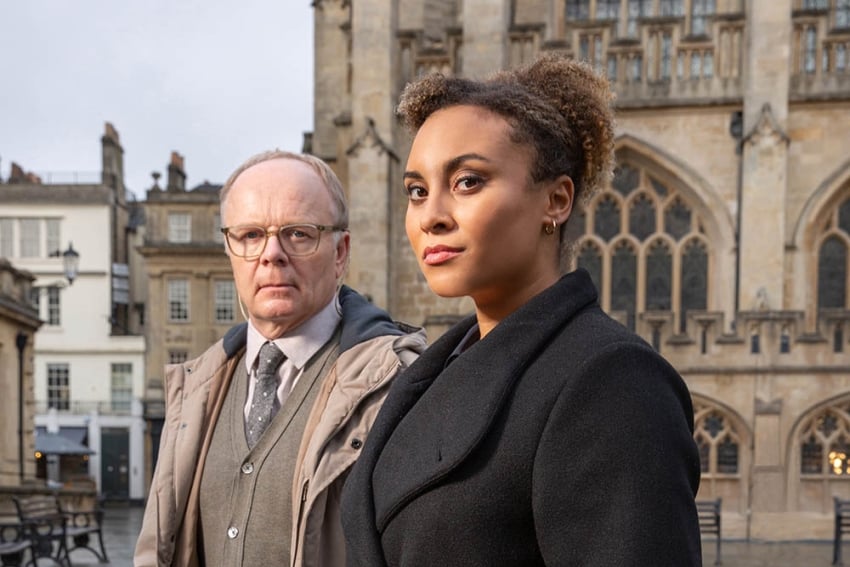 You can’t beat a good detective drama and ITV’s McDonald and Dodds stands out as one of the best new additions to the genre in recent years.

The lighthearted series returned for its long-awaited third instalment in 2022 with the titular duo being joined by a host of new and familiar faces as each new case unfolds.

Season 3 has welcomed some star-studded names to its list of guest stars but just who joins McDonald and Dodds in the cast of episode 4?

Titled Clouds Across the Moon, this week’s case offers a sting in the tail as Dodds emerges as the unexpected chief suspect.

The case sparks into life on the dawn of All Soul’s Day when the body of a successful Bath businessman is found in a shallow grave in the shadow of the Glastonbury Tor.

Several suspects begin to emerge as McDonald and Dodds delve into the case; from a local artist, Hector Ingham, to the man who found the body, Martin Silver, an IT consultant who also acts as a medium and claims to be able to contact the dead.

However, as an increasingly cryptic line of clues come to light, one name keeps appearing in paper trails and credit card statements, DS Dodds himself.

As ever in McDonald and Dodds, the titular duo lead the way throughout season 3 but are joined in the cast of episode 4 by a host of new arrivals.

First up in our final cast rundown of McDonald and Dodds’ third series is Max Bennett who takes on the role of the mysterious Martin Silver.

The 37-year-old actor made his debut back in 2007 and has appeared in more than 20 roles since then, notably appearing in 2012’s remake of The Sweeney, Bohemian Rhapsody, Guy Ritchie’s The Gentlemen as well as the series Poldark, Will, Leonardo and Saving Hope.

The 31-year-old actor is arguably best-known for his six-year stint on the CBBC series Young Dracula between 2006 and 2012 while other notable appearances have included The Sparticle Mystery, Emerald City, Catch-22, Suspicion and the film1917.

Joan Iyiola only made her acting debut in 2016 but already has almost 20 credits to her name as she takes on the role of Jemma Kent.

The actress’s biggest role to date came in the BBC series Enterprice while other appearances have come in Yonderland, New Blood and ITV’s 2021 mini-series Too Close.

With more than 60 roles to his name, Pearce Quigley is undoubtedly the most experienced guest star in episode 4 as he plays Bath artist Hector Ingham.

After making his on-screen debut in the 1989 film Ladder of Swords, the Salford-born actor has appeared in Detectorists, Cutting It, Happiness, Home from Home, Peter Kay’s Car Share, Sky’s Cobra drama, Prime Video’s The Wheel of Time and the films The Way Back, Peterloo and Millions.

And finally, we end with Joanna Riding who takes on the role of Maeve Gibney.

The Lancashire-born actress has been appearing on our screens since 1991 with notable appearances in Stella, Where the Heart Is and Disney’s Into the Woods.

In other news, Will Black Bird return for Season 2 on Apple TV+?