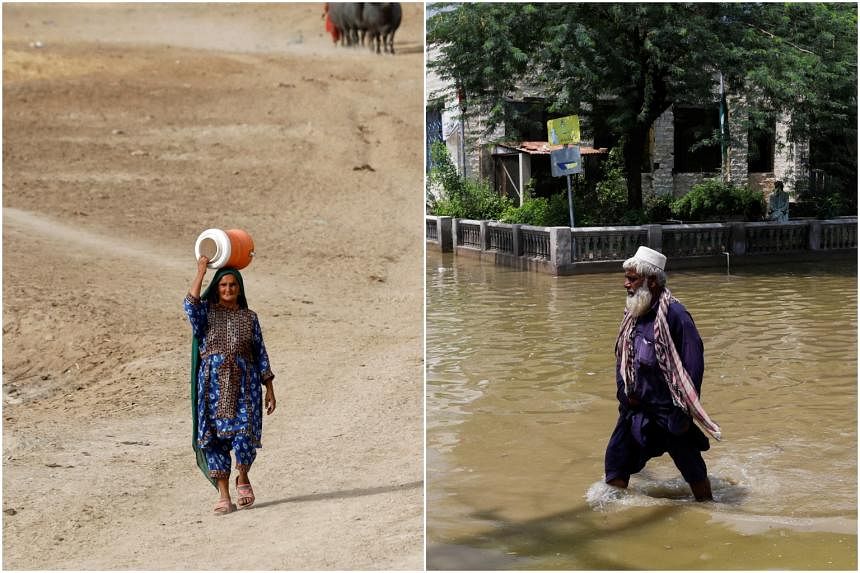 JACOBABAD, PAKISTAN (REUTERS) – Not long ago, Ms Sara Khan, principal at a school for disadvantaged girls in Jacobabad in southern Pakistan, looked on in alarm as some students passed out from the heat – the city was the world’s hottest at one point in May.

Now, after heavy monsoon rains submerged large parts of the country, her classrooms are flooded and many of the 200 students homeless, struggling to get enough food and caring for injured relatives.

Such extreme weather events in a short space of time have caused havoc across the country, killing hundreds of people, cutting off communities, wrecking homes and infrastructure and raising concerns over health and food security.

Jacobabad has not been spared. In May, temperatures topped 50 deg C, drying up canal beds and causing some residents to collapse from heatstroke.

Today, parts of the city are under water, though flooding has receded from its peak.

In Ms Khan’s neighbourhood in the east of the city, houses have been badly damaged.

On Thursday, she said she heard cries from a neighbour’s house when the roof collapsed from water damage, killing their nine-year-old son.

Many of her students are unlikely to return to school for months, having already lost class time during the brutal summer heatwave.

“Jacobabad is the hottest city in the world, there are so many challenges… before people had heatstroke, now people have lost their homes, almost everything (in the flood), they have become homeless,” she told Reuters.

Nineteen people in the city of around 200,000 are confirmed to have died in the flooding, including children, according to the city’s deputy commissioner, while local hospitals reported many more were sick or injured.

More than 40,000 people are living in temporary shelters, mostly in crowded schools with limited access to food.

One of the displaced, 40-year-old Dur Bibi, sat under a tent in the grounds of a school and recalled the moment she fled when water gushed into her home overnight late last week.

“I grabbed my children and rushed out of the house with bare feet,” she said, adding that the only thing they had time to take with them was a copy of the Quran.

Four days later, she has not been able to obtain medicine for her daughter, who is suffering from a fever.

“I have nothing, besides these kids. All of the belongings in my home have been swept away,” she said.