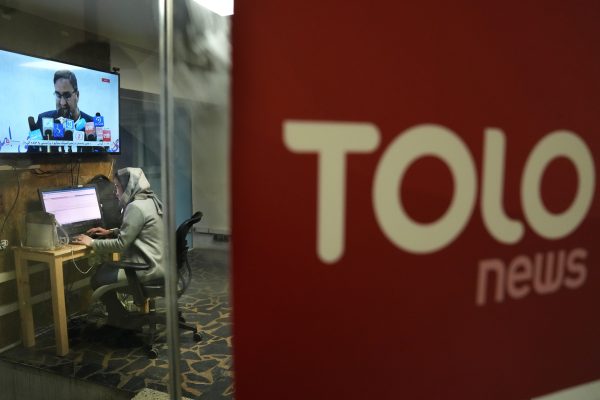 Fear accompanies reporter Banafsha Binesh from the moment she leaves her Kabul home each morning for the newsroom at Afghanistan’s largest television station.

It starts with the Taliban fighters, who roam the streets of the capital with weapons slung over their shoulders. Binesh, 27, says she is frightened by their reputation of harshness toward women, rather than any unsavory encounter.

Dread and uncertainty mount with every new report of a fellow journalist having been detained, interrogated, or beaten by Taliban fighters.

“Working is full of stress,” said Binesh, who works for TOLO-TV.

Since taking power six months ago, the country’s new rulers have also issued directives requiring journalists to keep Islamic principles in mind and work for the good of the nation — rules that would seem aimed at quashing independent reporting.

Bilal Karimi, a deputy spokesman for the Culture and Information Ministry, said criticism is tolerated, but must be constructive.

He blamed attacks on journalists — often while they cover women’s protests, explosions, and other news — on overzealous Taliban. Other arrests of journalists were not linked to their work, he claimed.

Steven Butler from the Committee to Protect Journalists said it’s not clear yet if attacks on journalists are systematic or “just semi-random events initiated by some Taliban official who has a grudge.”

“I would describe the landscape as full of hazards that are not fully predictable,” said Butler, the Asia program director at CPJ. “Journalists are being selectively picked up, interrogated about their coverage, beaten, and then released after hours or days.”

Most recently, two journalists working for the U.N. refugee agency were held for six days and released last week after the U.N. raised alarms. The Taliban said they released the journalists after confirming their identities.

Butler expressed concerns that Taliban intelligence officials are becoming more “hands-on” and have increasingly been implicated in arrests and disappearances.

In one trend-bucking development, TOLO now has more female than male journalists, both in the newsroom and out on the streets.

TOLO news director Khpolwak Sapai said he made a point of hiring women after nearly 90 percent of the company’s employees fled or were evacuated in the first days of the Taliban takeover.

He said female staffers have not been threatened by the Taliban authorities but have at times been denied access because of their gender.

In one case, a TOLO reporter was barred from a briefing by the acting minister of mines and petroleum when he found out the station had sent a woman to the event.

Sapai said TOLO promptly does stories on such incidents.

The ranks of journalists in Afghanistan thinned dramatically during the chaotic days of the Taliban takeover in August. Tens of thousands of Afghans fled or were evacuated by foreign governments and organizations.

A December survey by Reporters Without Borders and the Afghan Independent Journalist Association found that 231 out of 543 media outlets had closed, while more than 6,400 journalists lost their jobs after the Taliban takeover. The outlets closed for lack of funds or because journalists had left the country, according to the report.

During their previous rule in the late 1990s, the Taliban had no opposition and banned most television, radio, and newspapers. Foreign news organizations were able to operate at that time, along with some local outlets.

Faisal Mudaris, a broadcast journalist, blogger, and YouTube personality, spent eight days in Taliban custody, where he said he was beaten and threatened.

Mudaris is from the restive Panjshir Valley, the only holdout against Taliban rule during their first weeks in power. Mudaris fears his ethnicity as a Panjshiri, not his journalism, landed him in a Taliban lockup. He believes he remains at risk, fearing that no one can hold the Taliban accountable.

Journalists from other ethnic minorities, including the Hazaras who have long faced discrimination from successive governments, also worry. In the first months after the Taliban takeover, several journalists of a small outlet called Etilaat Roz were arrested and beaten. Both were Hazaras.

Karimi denies anyone is targeted because of their ethnicity and promises investigations will be carried out against offending Taliban. CPJ’s Butler said his advocacy group has no way to measure attacks based on ethnicity.

Still, there appears to be some room for critical reporting under the Taliban. For example, TOLO repeatedly aired a clip of Taliban fighters beating a former Afghan soldier.

Within days, top Taliban leader Hibatullah Akhunzada warned Taliban fighters against excesses, saying they would be punished. He reiterated a promise of amnesty for former soldiers.

“Did the news story bring about a change? I want to think it contributed to it,” said Sapai, the TOLO news director.

Sapai said views among the Taliban range from those who cling to the strict views of the past, to those who want a more open society that embraces education and work for all — including girls and women.

He believes domestic and external pressures on the Taliban should not be underestimated. “Most of the Taliban leadership accept that Afghanistan and the world [are] different now and it’s hard to turn back the clock but still the differences exist among them,” he said.

It’s the uncertainty about which view will prevail that has journalists worried.

“The fear that we have is for the day in the future when the Taliban will prevent us from the work that we do,” said TOLO reporter Asma Saeen, 22. “This is my big fear and my constant anxiety.”

She has no recollection of the harsh Taliban rule of the 1990s and said she has been able to work unhindered. Yet she resents the many restrictions imposed on girls and women, including banning teenage girls from returning to school, at least for now, and many women not being allowed to return to their jobs.

Both Saeen and Binesh want to leave Afghanistan, saying they long for the freedoms they enjoyed before the Taliban swept to power.

“We were not expecting that after 20 years of democracy to face these many restrictions,” said Binesh. “I am ready to go.”