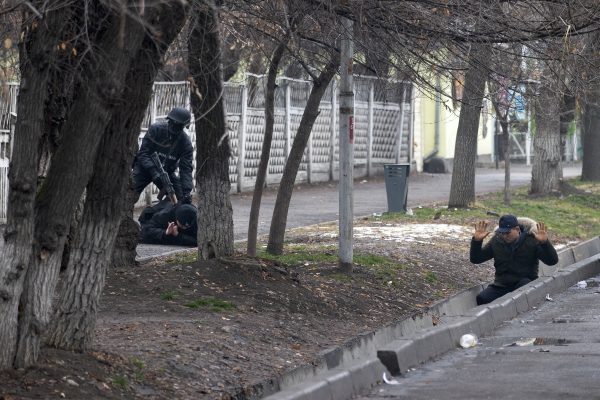 Fears of continued instability and uncertainty over the government’s course of action may cause more people to decide to leave Kazakhstan.

An armed riot police officer detains two protesters during a security anti-terrorists operation in a street after clashes in Almaty, Kazakhstan, January 8, 2022.

The January events in Kazakhstan have set in motion a number of socioeconomic processes. While the Kazakhstani population works to gradually recover from the traumatic experience amid state efforts to assert its commitment to promised reforms, questions arise about how the recent development will affect migratory moods. Fears of continued instability and uncertainty over the government’s course of action may exacerbate the already considerable human capital outflows among both the country’s Kazakh and non-Kazakh populations. The government’s ability to respond to social demands and implement genuine structural reforms now might prove decisive in shaping the contours of Kazakhstan’s demography in the future.

Kazakhstan’s net migration rate has been consistently negative since 2012, with around 70 percent of emigrants being skilled and educated individuals between 2015 and 2020. The trend suggests that the toll of migration has fallen heavily on the country’s (not so numerous) middle class. The State Concept of Migration Policy for 2022-2026 acknowledges the country’s brain drain problem, stating that 64 percent of Kazakhstanis were either already working or willing to work abroad in 2020 – a 3 percent increase from 2018. As the U.N. International Organization for Migration’s 2019 survey report indicates, young Kazakhstanis reside overseas because of corruption, ineffective public governance, lack of career opportunities, uncertainty about the future, low wages, the quality of education, and human rights abuses.

Frustrations about the same systemic socioeconomic and political ailments were at the heart of the unrest in January. Rising inflation, unequal distribution of economic benefits, disillusionment with widespread corruption, and political stagnation were a few of the many causes behind the public discontent on display. Added to this bouquet societal irritants is now the fear of political instability.

Although the Kazakhstani government prides itself on preserving internal peace for the country’s first 30 years of independence, “bloody January” and its aftermath triggered concerns about the state’s ability to provide basic security. Migration specialists note that the January tragedy has likely tipped the calculus for previously undecided groups in favor of moving abroad. Some suggest that the perception of potential escalation of ethnic tensions might become an increasingly important factor in shaping emigration dynamics.

In light of increasingly nationalizing trends in recent years, ethnic minorities are likely to constitute the main portion of the next emigration wave from Kazakhstan. Despite Nursultan Nazarbayev’s heavy emphasis on the importance of embracing cultural diversity and peaceful coexistence of the more than 120 ethnic groups in Kazakhstan, nation-building policies have been increasingly switching to emphasize an ethno-culturally defined national identity and adopting assimilationist language laws.

Given the preexisting incentives to leave in light of increasing ethnonationalist sentiments and state policies, some ethnic minority groups might also now be more concerned about socioeconomic grievances spilling over into the inter-ethnic dimension. Poorer rural villages are known to have a higher incidence of inter-ethnic clashes. In February 2020, for example, deadly clashes erupted in the southern village of Masanchi, in Korday district in the Zhambyl region, between ethnic Kazakhs and Dungans. The Dungan side suffered disproportionately higher losses of lives and property destroyed, looted, and burned in targeted pogroms while also being punished much more harshly in the subsequent trial. While the official state narrative claims the clashes originated out of an ordinary domestic disagreements and were exacerbated due to organized criminal influences, experts cite ethnic tensions building up in the background of grievances over growing inequality, with Kazakh villagers feeling economically worse off compared to their Dungan minority counterparts.

The January unrest showed how long-standing socioeconomic frustrations can lead to outbursts of aggression and exposed the groups, particularly those vulnerable and reactive to economic instability. The protests had a young face. Many of those who flooded the streets of Almaty in January were young, primarily Kazakh-speaking men from rural areas – a segment of the population heavily affected by unemployment and disenchanted with its prospects for social mobility.

In the meantime, the increasingly youthful nation (Kazakhstan has a median age of 30.7 years) with children and youth making up 53.69 percent of the population might soon feel an even heavier burden with regard to job shortages. Less palpable at the moment, these disconcerting prospects might push even more Kazakhstanis to seek economic opportunities elsewhere in the long run.

Addressing the widespread uncertainty over the future of the Kazakhstani economy and sociopolitical climate necessitates the political will for genuine political liberalization and a resolve for immediate implementation of the declared reforms on behalf of the leadership. To dispel widespread qualms in the aftermath of bloody January, Kazakhstani President Kassym-Jomart Tokayev unveiled an ambitious post-crisis package and pledged structural reforms aimed at addressing vast inequality, marginalization, and corruption. In what some view as a flirtation with the public, Tokayev conspicuously embarked on “de-oligarchization” and promised a fairer redistribution of wealth in the so-called “New Kazakhstan.” Emboldened, the president’s repeated diatribes against the country’s richest, including Nazarbayev-era oligarchs, sound refreshing to the public’s ears.

Yet doubts persist on whether and when ordinary people will reap the fruits of these promised reforms. Implementation of the rhetoric will likely prove a litmus test for Tokayev’s reform-mindedness. So far, the government’s failure to provide accurate information about the victims of the January tragedy alongside a cosmetic reshuffling of the state apparatus cannot but raise concerns about the sincerity of the leadership’s intentions.

That said, some believe that the wind of change is sweeping from Ak Orda, the presidential palace. Those who are more skeptical might well choose to change their passports permanently.