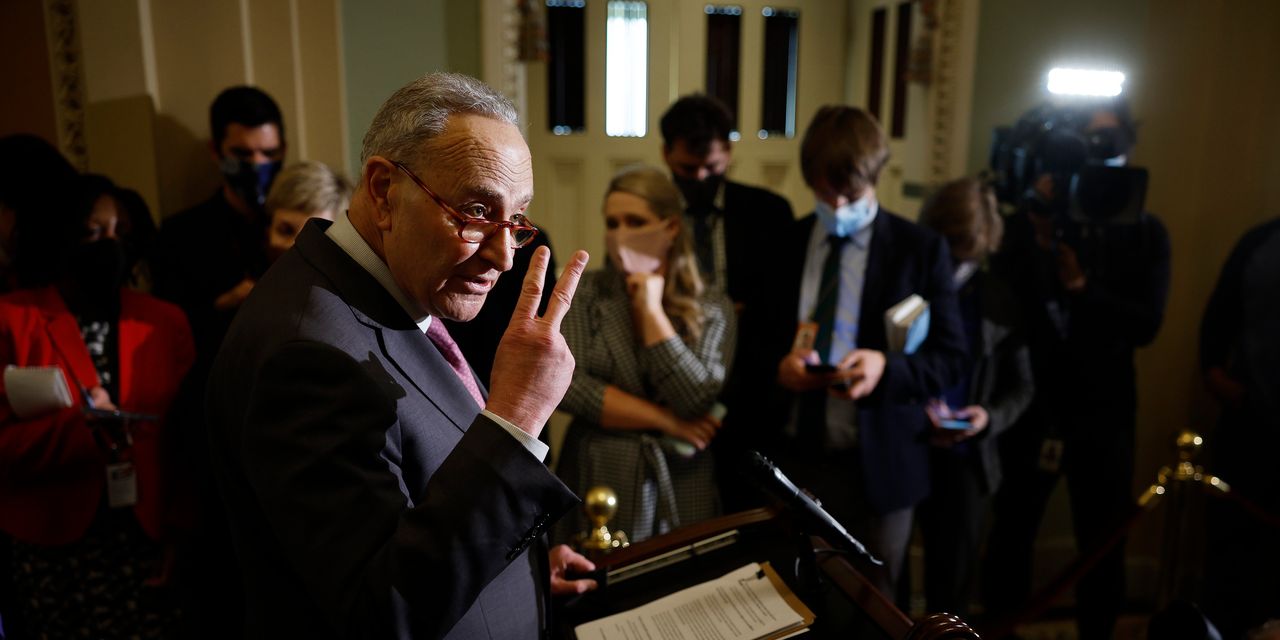 WASHINGTON—Democrats prepared Tuesday to raise the government’s borrowing limit by $2.5 trillion, moving to quickly pass the measure through both houses of Congress and push the next debt-ceiling standoff past the midterm elections.

Lawmakers expect the $2.5 trillion increase to the roughly $29 trillion in debt will allow enough borrowing to pay the country’s bills into 2023, when Congress would again have to act on the issue to avert default.

The Senate is expected to give final approval to the measure on Tuesday, while the House could act as soon as late Tuesday or early Wednesday. The Treasury Department, which has been taking such steps as suspending certain investments to conserve cash, has warned lawmakers that it could be unable to meet the country’s obligations as soon as Wednesday if the debt ceiling isn’t raised.

Final passage of the debt-ceiling increase through Congress will conclude weeks of work on the issue. In an effort to keep their political distance from the ceiling increase, Republicans negotiated an agreement allowing Senate Democrats to raise the borrowing limit along party lines, instead of with the 60 votes typically needed to advance legislation in the Senate.

That procedural agreement was codified in a separate piece of legislation that the Senate passed last week with bipartisan support.

In a sign of the complicated politics of the debt limit vote, Senate Majority Leader

(D., N.Y.) thanked Republicans for working with Democrats on the procedural agreement and avoiding the brinkmanship that marked the issue earlier this year.

“No brinkmanship, no default on the debt, no risk of another recession: responsible governing has won on this exceedingly important issue. The American people can breathe easy and rest assured there will not be a default,” he said. “I thank the Republican leader and my Republican colleagues who voted with us to address this issue.”

“Later today, every Senate Democrat is going to vote on party lines to raise our nation’s debt limit by trillions of dollars,” Mr. McConnell said.

Raising the debt limit by $2.5 trillion—rather than a much larger increase that would allow lawmakers to avoid the issue for years—was part of the agreement between Messrs. McConnell and Schumer, according to a person familiar with the matter. Lawmakers have in recent years largely suspended the debt limit for a period of time, but Republicans sought to force Democrats to sign on to a specific level of debt.

The legislative legerdemain needed to craft the multistep procedural agreement and raise the debt limit this year is a sign of the difficulty lawmakers may face on the issue in 2023.

Republicans are favored to win control of the House in next year’s midterms, meaning future negotiations over the issue could become more fraught. The agreement between Messrs. McConnell and Schumer disappointed many Republicans, who wanted the GOP to do more to resist a debt-limit increase.

Addressing another piece of year-end business, the Senate voted 86-13 on Tuesday to advance the National Defense Authorization Act, a $778 billion defense policy and budget bill that includes a 2.7% pay raise for troops and money for military construction, ships and aircraft. The legislation also creates an independent commission to study the Afghanistan War and makes historic changes to the military-justice system, removing commanders’ authority to make prosecutorial decisions about some serious crimes such as sexual assault, murder and kidnapping.

Final passage of the bill is expected in the Senate on Wednesday, with bipartisan support. It will then head to President Biden’s desk for his signature.