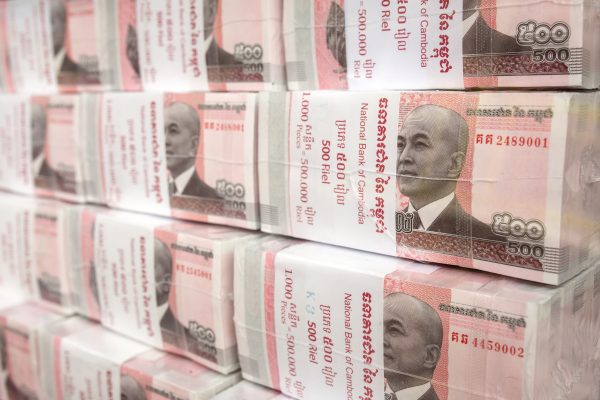 There are a number of reasons why the Cambodian government has long sought to achieve “rielization” – limiting the use of the United States dollar and promoting the circulation of the local currency, the riel.

First, as Chea Serey, governor of the National Bank of Cambodia (NBC), has put it, widespread use of the riel “could enhance the effectiveness of conducting monetary policy to maintain price stability and support economic growth.”

Second, the NBC cannot be a lender of last resort – offering loans to banks or other eligible institutions that are experiencing financial difficulties – if it cannot get people to hold the local currency.

Due to dollarization, the Cambodian government is also missing out on seigniorage, or the value that can be gained from printing a currency note.

Cambodia needs to be more cautious about the global economic recovery. The rising inflationary trends in major developed economies since the outbreak of the COVID-19 pandemic might put the country’s economy on edge, while the U.S. Federal Reserve’s recent interest rate hikes could also lead to depreciation of the riel.

According to the World Bank’s latest economic update, high inflation in the United States, and subsequent monetary tightening by the Fed, could lead to “rising domestic price pressures, which often results in imported inflation.”

However, it’s clear that the push to bring Cambodia closer to full riel saturation, and away from the use of the U.S. dollar is about more than just straightforward monetary policy. This initiative is also a question of bolstering the riel’s connection to the Cambodian national identity.

In July 2017, the Ministry of Commerce issued an inter-ministerial agreement requiring all businesses and service providers to use riel on the price tags of their products and services. And in 2020, the NBC announced another campaign to phase out the circulation of small-denomination U.S. dollar bills in the economy.

These initiatives are not only to push toward a more robust “rielization” but also have been accompanied by messaging from officials about what it would mean, in a symbolic way, for Cambodia to be more dependent on its own currency.

In Channy, the president of Acleda Bank has said that it is politically important for Cambodia to have its currency. “It is about sovereignty – we will have our own identity, our currency, and it is a source of national pride as well,” he has been quoted as saying.

Strengthening the riel is one way of shedding a past that was defined by dependency and moving toward a future of self-sufficiency. And when the riel is strong, Cambodian people can proudly pull out the colorful banknotes and be secure in the power and stability of their nation’s currency.

With the ultimate goal of achieving de-dollarization, the NBC and the government, particularly the Ministry of Economy and Finance, have worked hand in hand to push for de-dollarization.

But despite many campaigns, full rielization still seems very far away. What is holding Cambodia back from promoting the use of its national currency?

One of the biggest issues may be around trust. Trust in the riel was eroded during the country’s years of upheaval and has struggled to be re-established since. During the Khmer Rouge, Cambodia became the only country in the world ever to have abolished money. Later on, the country’s dependency on the dollar became cemented by the massive influx of U.S. dollars during the United Nations Transitional Authority in Cambodia peacekeeping mission from 1992 to 1993, and the use of the dollar gained even more popularity with the two subsequent inflation crises in 1993 and 2008.

This history has entrenched a popular perspective toward the riel, and a concern about the intrinsic value of the local currency may be entrenched as well. However, how people react to the use of riel is telling as it ties into their perceived value of riel and whether people have a sense of faith in the currency that they hold in their wallets.

While riel is being widely used as a means of payment at the government level, in contrast, the private sector in Cambodia still prefers U.S. dollars, especially in urban areas. Almost all forms of investment, tourism, and aid payments are made in U.S. dollars and all restaurants and tourist-oriented businesses still quote prices in dollars. In general, Cambodian people do not hesitate to accept the U.S. dollar, despite NBC’s recent campaigns.

In 2019, a poll to gauge public sentiment regarding the riel was conducted by The Phnom Penh Post, and showed that while many respondents held positive views of the Cambodian riel, they also expressed a range of concerns.

“Riel usage is easy in our daily expenses and easy to keep, even though it’s a little bit torn or old yet still can be used. More important, it also helps to promote our national currency to be more stable,” an officer from the Ministry of Labor and Vocational Training was quoted as saying.

“However,” that same respondent added, “it’s hard to use riel to buy expensive stuff such as car or house, and some imported products like electronics and technology items because it requires a huge amount.”

A vendor in Phnom Penh who participated in the poll said, “I am concerned about the sizes and colors of the riel; it leads to a lot of confusion among the users.” Another vendor added that “sometimes it takes a long time to check the riel because some notes have the same size and color, so some illiterate vendors who can’t read the numbers, it’s so difficult for them.”

Recently, ABA, one of the biggest banks in Cambodia, stopped dispensing smaller U.S. dollar denominations at its ATMs. As a result, many customers have been posting online to show their frustration with the bank, clearly indicating there is still a demand for the dollar.

“I think ABA should go back to their previous operation model by allowing the customer to dispense small-denominated U.S. dollars such as 10$, 20$ and 50$ bills,” a Facebook user posted in March.

Kea Borann, a chairman of the Cambodia Microfinance Association told the Phnom Penh Post that “to increase the use of riel, Cambodians and all business owners need to join together. If not, banks’ and microfinance institutions’ efforts alone will not accomplish NBC’s goal.”

De-dollarization is not a policy that can be achieved overnight, as many experts have mentioned. But there are many other paths that the Cambodian government and NBC can implement gradually.

The most important factor that could be implemented to achieve this goal is to build trust in the riel.

“Trust is the major issue here. When people have confidence in the regulator and the government’s ability to control monetary policy, then people will be willing to hold the local currency in higher regard,” Jayant Menon, a lead economist at the Asian Development Bank, has said.

Other initiatives that could also be considered to attract Cambodian people could involve the design of the banknotes, for instance, focusing on the size and paper quality of the banknotes, as well as designs that make denominations easier to identify so that people will use the riel at ease. Printing banknotes using a better material such as polymer, which is used in Singapore and Hong Kong, would be very attractive, as well as prolonging the life of banknotes.

Promoting the use of riel, and building trust in the riel, is not only a policy goal for the government; it is also an initiative that reveals something about the Cambodian people and their identity and their trust in institutions as a whole.

This commentary is part of the Social Cohesion Project. The project invites young Cambodian researchers to conceptualize and model social cohesion in Cambodia. It is produced in partnership between Future Forum and UNDP Cambodia.