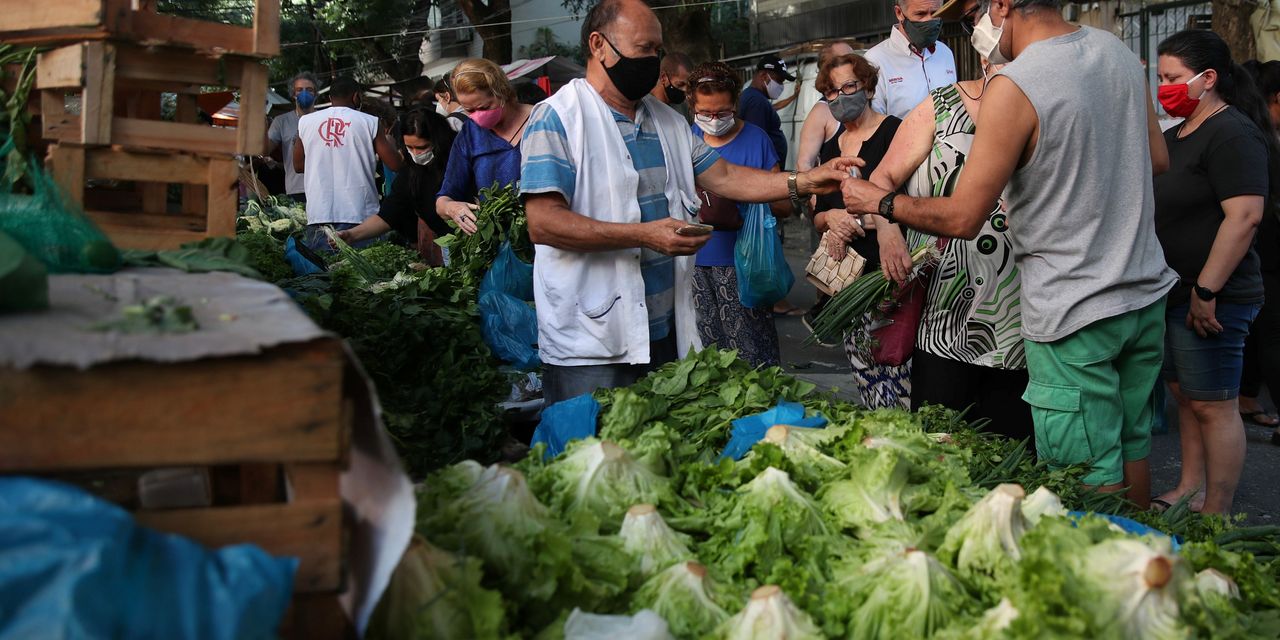 SÃO PAULO—Inflation is surging in Brazil, forcing a country with one of the highest death rates from Covid-19 to grapple with the economic fallout of the pandemic.

While the global economy is forecast to rebound more than 4% next year, including in countries bordering Brazil, more economists expect Brazil to remain stuck in recession during 2022 as it battles one of the world’s highest annual inflation rates of 10.7%.

Inflation rates from Canada to Germany have climbed to the highest level in decades as businesses and consumers emerge from lockdowns, boosting energy prices and prompting supply bottlenecks. U.S. inflation hit a 39-year high in November, the government reported Friday.

Brazil, which suffered punishing hyperinflation in the 1980s and 1990s, has faced a tougher struggle against its old nemesis—one that economists said could weigh on growth for at least the next year. Credit Suisse and Itaú Unibanco, one of Brazil’s biggest banks, cut their growth forecasts recently and now predict the country’s economy to contract 0.5% next year.

Latin America’s biggest economy was only eking out feeble growth before the pandemic hit. A sharp slump since July in the price of iron ore, one of Brazil’s top exports, has stymied recent growth. But the return of inflation is proving to be the biggest obstacle to economic recovery, economists said.

At 10.7%, Brazil’s 12-month inflation rate is the third-highest among the major developed and emerging economies that form the Group of 20, after Turkey and Argentina, according to the Organization for Economic Cooperation and Development. A severe drought, the worst in almost a century, has contributed to inflation, drying up hydroelectric reservoirs and adding to demand at more-expensive thermal plants.

A sharp depreciation in the Brazilian real—which has lost about 25% of its value against the dollar over the past two years—has increased the price of imported goods including fuel, adding to inflation.

efforts to boost spending for the poor before next year’s election, at the expense of the country’s fiscal health, are partly to blame for the currency weakness. Impending interest-rate increases in the U.S. risk boosting inflation further in Brazil and other emerging-market economies by strengthening the dollar against currencies such as the real.

Brazil’s history of hyperinflation makes it harder to fight rising prices today. One vestige is indexation, under which the country links costs such as wages to inflation to protect the purchasing power of companies and average Brazilians in the midst of spiraling prices.

The downside is that temporary price shocks—such as those affecting the global economy—end up sticking. A temporary surge in the price of oil, for example, increases wages and boosts demand for other goods.

“Brazil’s situation is worse than elsewhere in Latin America and other countries across the world,” said André Perfeito, chief economist at Necton, a São Paulo-based brokerage. “Indexation ends up amplifying external price shocks.”

Some economists point to particularly high inflation rates across Brazil and much of Latin America as a cruel reward for the region’s rapid progress in vaccinating swaths of the population over recent months, allowing an abrupt return to a nearly normal life. About 65% of all Brazilians are now fully vaccinated against Covid-19, more than the U.S. and a sharp rise from six months ago, when only 11% were fully inoculated.

The return to double-digit inflation has had a crushing effect on the poor, who were already reeling from the pandemic. More than one in nine people who have died from Covid-19 around the world were from Brazil, which has the highest per capita death rate from the disease among the 40 most-populous countries, according to the University of Oxford’s Our World in Data project.

As with millions of Brazil’s poorest families, Lucilene de Souza, a single mother of three from São Paulo, hasn’t been able to afford to eat meat for months. After losing her job at a restaurant when the pandemic hit nearly two years ago, she spends her days begging for food outside a shopping mall.

“I’m scared…my youngest is just 4, and I can’t afford what he needs,” she said. “The government handouts aren’t enough with prices like this.”

Economists don’t see a risk that price increases will spiral out of control in the country, predicting that 12-month inflation will slow to 5% by the end of next year and 3.5% in 2023. The deepest concern, instead, is that the aggressive interest-rate increases that Brazil’s central bank is using to combat inflation will crush any post-pandemic economic recovery.

Since March the central bank has raised the benchmark lending rate by more than 7 percentage points to 9.25%, taking it from a record low of 2% to the highest level in more than four years. Economists expect it to reach double-digits next year.

In Brazil, where older generations remember the dark days when hyperinflation wiped out their savings and sent them rushing to the grocery store after every paycheck, the central bank is still battling to prove its credibility.

While the Federal Reserve in the U.S. and other central banks in developed countries have taken a cautious approach to what they see as temporary price shocks in the wake of the pandemic, Brazil doesn’t have that luxury. The central bank has no choice but to aggressively raise rates if it wants to prevent an even worse scenario, said Alberto Ramos, an economist at Goldman Sachs.

“If they don’t act, inflation runs higher…and then becomes a lot costlier to bring down later on,” said Mr. Ramos.

After decades of debate, the government gave the central bank formal independence earlier this year. That has raised pressure internally on the central-bank monetary committee to be even more hawkish. Twelve-month inflation is already expected to exceed the country’s 3.75% inflation target this year by a wide margin.

“The central bank is not going to want to miss the 2022 target too,” said Mr. Perfeito. “Imagine how that would look? They get independence, and then they miss the target two years in a row.”

Write to Samantha Pearson at samantha.pearson@wsj.com