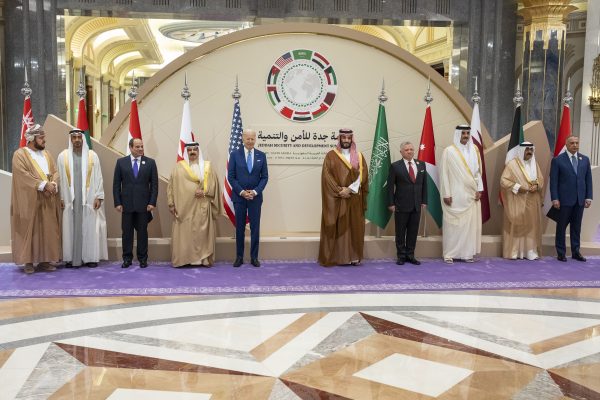 U.S. President Joe Biden just completed his first trip to the Middle East. Much has already been written about it, especially in terms of how it affects internal regional politics. But the global implications of this trip, the lessons it offers in terms of the U.S. Indo-Pacific policy and the China-U.S. rivalry, have not yet been systematically discussed. In what follows, I will unpack four implications.

In the so-called “new Cold War” that the United States is attempting to wage against China, Biden has been promoting “values” (e.g., democracy and human rights) as the main bedrock upon which alliances should be constructed. His visit to Saudi Arabia puts a serious dent in that discourse.

Few missed this aspect of the trip. Following the gruesome murder of Washington Post journalist Jamal Khashoggi by a Saudi death squad in Turkey, Saudi Arabia’s de facto ruler, Mohammed bin Salman (MBS), came under heavy diplomatic pressure. Biden personally contributed to that pressure by pledging, during his presidential campaign, that he would make Saudi Arabia a “pariah” state because he, unlike Trump, would stand for “values.”

On this trip, Biden “closed the Saudi’s prince’s pariah era” with an already infamous fist bump, which will not go unnoticed by both Indo-Pacific allies and swing states. The latter are countries that are not firmly entrenched in one camp or another and can be swayed either way. Most ASEAN countries, for instance, can be categorized as such. Developing countries could now readily justify a cold, calculated approach to working with China. Biden’s “values” talk is unlikely to convince too many of them – if it ever did.

‘Not Walking Away’ From the Middle East

President Barack Obama’s Pivot to Asia in 2011 was designed for the United States to confront or contain China. He wanted the U.S. to pivot away from the Middle East and Europe, hence his 2009-2013 reset with Russia and the 2015 nuclear deal with Iran (formally known as the Joint Comprehensive Plan of Action, or JCPOA). From the very outset, the pivot has been “derailed” by major distractions and crises, some of them self-imposed, such as the excessive focus of U.S. policymakers on Syria since 2011.

The Russian reset fell apart when Russia annexed Crimea in 2014. In 2022, the biggest derailment of the pivot happened: Putin’s war in Ukraine. The United States is now practically engaged in a proxy war against Russia. This is not helping Washington keep its attention focused on the Indo-Pacific.

Meanwhile, the JCPOA has been bursting at the seams since 2018 when the U.S. reneged on the deal and withdrew from it. Instead of rejoining the deal upon taking office and removing a major distraction for the U.S. foreign policy – and bringing Iranian energy to the Western markets – Biden has, in substance, pursued Trump’s maximum pressure policy against Iran. This is a fully self-made U.S. problem.

This trip showed that, for better or worse, the United States will not pivot away from the Middle East for the foreseeable future. Biden told a summit of Arab leaders that the U.S. is “not walking away” from the region so as not leave a “vacuum” for China, Russia, or Iran to fill. The more the U.S. is stuck in the Middle East (and Europe), the more breathing space there will be for China to do its thing in the Indo-Pacific.

Pushing Iran Further to the East

Next to looking for more oil, Biden’s trip to the Middle East became an anti-Iran tour of sorts, just as his recent Asia trip was an anti-China tour. Not only has Biden’s trip exacerbated the JCPOA’s death spiral, but he also threatened Iran with the use of force, meaning another possible large-scale disastrous war, which the U.S. can ill afford.

While this policy works as a short-term profit-making tactic of selling weapons, it falls spectacularly short of a strategy. A regional strategy needs to have a comprehensive, constructive, and long-term vision; it needs to be about more than countering a country. Biden’s anti-Iran policy has already backfired on both regional and global levels.

Regionally, this policy has already backfired in two ways: First, regional countries announced that they are not going to join an anti-Iran alliance. The Saudis said that there is no Arab NATO against Iran and that the kingdom wants to normalize relations with Iran. The Emiratis said they are going to send their ambassador to Iran and rebuild ties.

Second, in response to Biden’s threats on this trip and the failing nuclear negotiations, Iran announced that the country is “technically capable of building a nuclear bomb,” but has not decided to pursue such a goal. All of this could have been avoided by Biden simply rejoining the JCPOA.

Globally, Biden’s Iran policy works against his China and Indo-Pacific policy. Given its history and geography, Iran has been a global swing state, situated as it is between the East and West. Pre-1979, it was a staunch ally of the West against the USSR. Post-1979, it joined the anti-imperialist Non-Aligned Movement. In more recent years, the country has been steadily joining the Sino-Russian Eurasian camp thanks in no small part to American sanctions against the country – and of course Iran’s own choices.

The JCPOA was (and still is) a chance for the U.S. and the West to lure Iran back, reduce its dependence on China and Russia, bring Iranian energy to the markets, and build on the country’s highly pro-Western culture. But Biden’s policies, including on this trip, are pushing Iran, an indispensable geopolitical and geoeconomic actor at the heart of Eurasia, to further cement its own pivot to “the East” by enthusiastically joining the Shanghai Cooperation Organization (SCO) and potentially BRICS, signing a 25-year strategic pact with China, and pursuing a free trade agreement with the Russia-led Eurasian Economic Union. Put otherwise, China (and Russia) are by far the biggest winners of U.S. policies toward Iran.

U.S. foreign policy toward West Asia suffers from the same malaise as in East Asia, namely, a screaming absence of geoeconomics. Unlike China, which materialized RCEP (not to mention its BRI) with Indo-Pacific countries, the U.S. has neither joined any existing major free trade deal (such as the Japan-led CPTPP) nor offered any substantive deal or initiative.

This absence was palpable during Biden’s latest trip. While weapons sales or humbly asking the Saudis for more oil can technically qualify as short-term geoeconomic efforts, motivated by profit-making or the Ukraine crisis, they do not constitute a regional geoeconomic strategy that can compete with China’s.

China’s global strategy has a clear long-term vision for West Asia. In fact, part of the Chinese logic of increasing its presence in West (and Central) Asia is, inter alia, to break free from American containment policy and the claustrophobic dynamics of East Asia. The BRI functions as the long-term geoeconomic component of China’s strategy, encompassing both East and West Asia. With this strategy, China has become the top trading partner of most countries in West Asia, even Saudi Arabia, for which the United States used to be the top trading partner.

Saudi and regional leaders would not fail to notice that Biden made this trip not out of strategic vision but out of the short-term urgency of the Ukraine crisis. This does not bode well for the United States’ regional competition with China. Regional countries will continue to look eastward (to China, India, and others) after Biden’s visit, as they did before this visit. For better or worse, China’s geoeconomic influence in the region remains unchallenged.

The United States needs a comprehensive multipronged strategy for West Asia, as it needs one for the Indo-Pacific, if it wants to be taken seriously and compete with China. Such a strategy should recognize the following four interlinked realities of the region: First, the region is geopolitically exhausted, so much so that even traditional foes are (re-)establishing diplomatic ties, such as Saudi-Iranian de-escalation talks or Arab-Israeli détente.

Second, the most widely recognized challenge for the region is to move beyond its dependence on hydrocarbons, hence the various developmental visions in the region including the Saudi, Emirati, and Qatari Vision 2030, or Oman’s Vision 2040.

Third, the hot-selling commodity in the region to replace hydrocarbons is geoeconomic connectivity. Various regional countries are vying for further connectivity between East and West, North and South.

Fourth and most importantly, the Middle East is one of the regions hardest hit by climate change, currently burning in extreme heat, drying up with little water, and suffocating by dust clouds; it is in dire need of a major green future.

Going back to old tired geopolitical games of oil and weapons is not the way forward. Demonizing China in the Indo-Pacific and relying on weapons alone do not qualify as a strategy and is not enough to convince Indo-Pacific countries to join the United States. Similarly, demonizing Iran and its nuclear issue (which can readily be brought under control by the U.S. rejoining JCPOA) and weapons sales cannot really amount to a serious U.S. regional strategy in West Asia, nor can it compete with China’s multipronged strategic approach to the region.