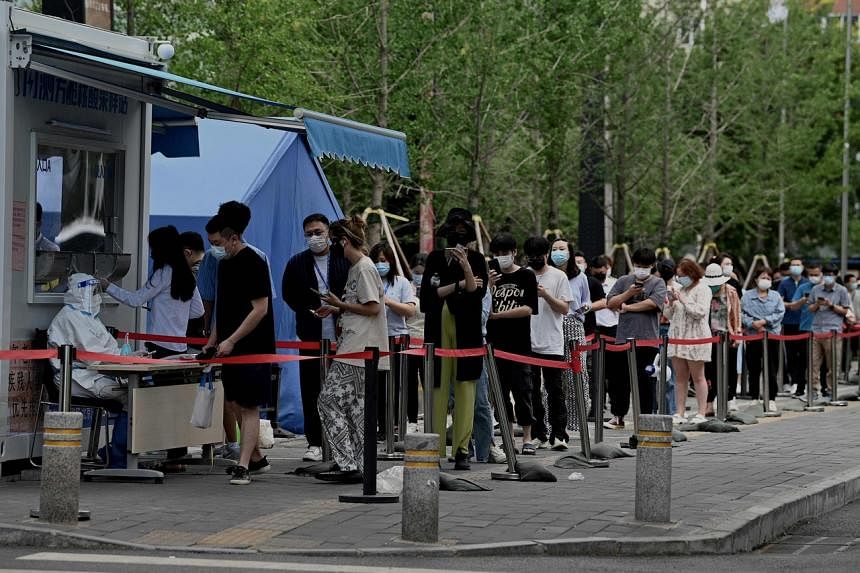 BEIJING (BLOOMBERG) – Beijing recorded more than 50 Covid-19 cases for the fifth day in a row as authorities crack down on venues linked to the outbreak, including revoking the license of a bar at the centre of the latest flare-up.

The Chinese capital reported 63 infections for Tuesday (June 14), following 74 on Monday. Cases have spiked in recent days, having dropped to single-digits last week.

The jump in cases and reinstatement of restrictions just days after they started to be eased shows the difficulties of stamping out the more contagious virus variants, as China continues to prosecute its Covid Zero strategy.

Shanghai reported 15 cases for Tuesday, from 17 on Monday. Three of the infections were found outside government-mandated quarantine as the virus continues to percolate in the community.

The city’s Songjiang district will conduct another round of mass testing on Wednesday.

While cases in the country’s two biggest cities are still below levels seen in late May, when stricter curbs were in place, authorities have been quick to re-impose limitations after earlier trumpeting their success in bringing the outbreak under control.

In Beijing, most schools delayed a reopening that was planned for Monday, while all sports competitions were halted.

Authorities earlier this week closed more bars, movie theatres, gyms and other venues deemed to be “potential magnifiers” of the outbreak.

The bar where many of the latest cases were traced to will be stripped of its business license for failing to follow Covid-19 control rules, the Beijing Daily reported on Tuesday.