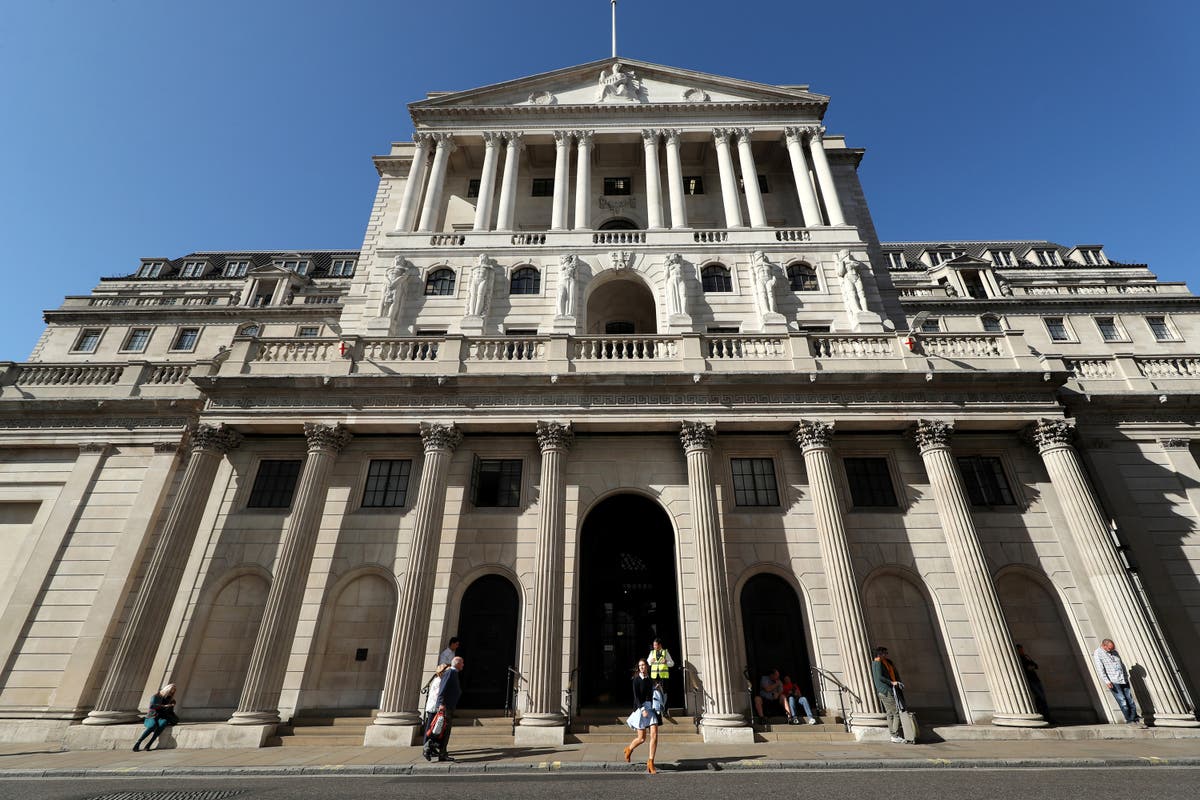 The 0.5% increase is the biggest rise in 27 years and comes amid a cost of living crisis that has sent bills soaring for millions of households.

“Inflationary pressures in the United Kingdom and the rest of Europe have intensified significantly since the May Monetary Policy Report and the MPC’s previous meeting,” a statement from the Bank said.

“That largely reflects a near-doubling in wholesale gas prices since May, owing to Russia’s restriction of gas supplies to Europe and the risk of further curbs.

“As this feeds through to retail energy prices, it will exacerbate the fall in real incomes for UK households and further increase UK CPI inflation in the near term.

“CPI inflation is expected to rise more than forecast in the May Report, from 9.4% in June to just over 13% in 2022 Q4, and to remain at very elevated levels throughout much of 2023, before falling to the 2% target two years ahead.”

It added: “The United Kingdom is now projected to enter recession from the fourth quarter of this year.

“Real household post-tax income is projected to fall sharply in 2022 and 2023, while consumption growth turns negative.”

The value of the pound dropped 0.05% lower against the US dollar at 1.211 shortly after the Bank of England’s rate rise was confirmed, having been 0.7% higher ahead of the announcement. The pound has dropped 0.5% against the euro to 1.189.

Shadow chancellor Rachel Reeves said: “This is further proof that the Conservatives have lost control of the economy, with skyrocketing inflation set to continue, while mortgage and borrowing rates continue to rise.

“As families and pensioners worry about how they’re going to pay their bills, the Tory leadership candidates are touring the country announcing unworkable policies that will do nothing to help people get through this crisis.”

The monetary policy committee (MPC) of nine members voted eight to one in favour of the 0.5% increase.

But one member of the MPC – Silvana Tenreyro – was out-voted in calling for a quarter point rise to 1.5%.

In minutes from the rates decision meeting, the Bank said the majority of the MPC felt a “more forceful policy action was justified”.

It said: “Against the backdrop of another jump in energy prices, there had been indications that inflationary pressures were becoming more persistent and broadening to more domestically driven sectors.”

“Overall, a faster pace of policy tightening at this meeting would help to bring inflation back to the 2% target sustainably in the medium term, and to reduce the risks of a more extended and costly tightening cycle later,” the Bank added.

Tory leadership hopeful and former chancellor Rishi Sunak said: “One of the most urgent challenges we face as a country is getting inflation under control as quickly as possible.

“The Bank has acted today and it is imperative that any future government grips inflation, not exacerbates it.

“Increasing borrowing will put upward pressure on interest rates, which will mean increased payments on people’s mortgages. It will also make high inflation and high prices last for longer, making everyone poorer.

“As prime minister I would prioritise gripping inflation, growing the economy and then cutting taxes.”