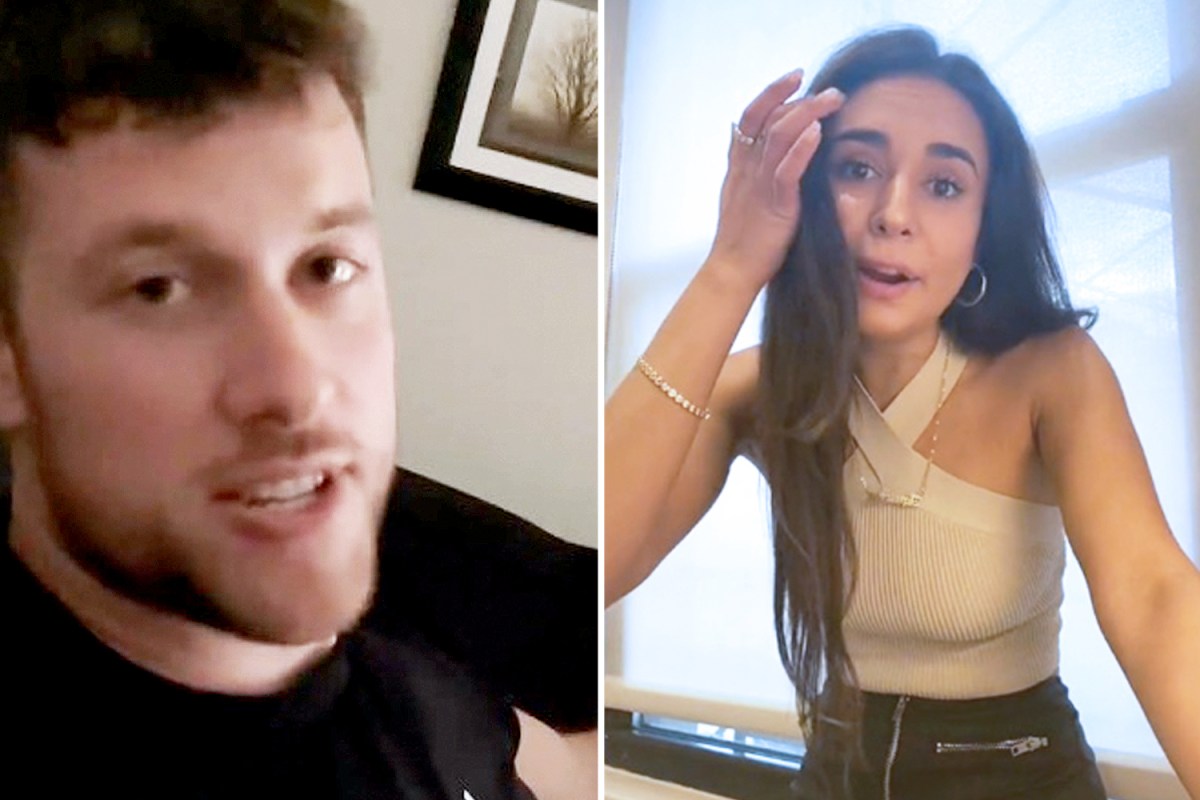 CLAYTON Echard slammed a TikTok user who claimed he CHEATED on Susie Evans with her, calling it “embarrassing.”

He took to Instagram to show grabs of his cell phone after she alleged they “hooked up” Friday.

A TikTok user named Sasha went semi-viral on Saturday with some vehement claims about the night before.

She claimed to have “met” Clayton, 28, at a bar who told her he was “just on” the Bachelor, though she said she hadn’t watched the show.

“I should have googled him man, so I ended up going back with him” she claimed in the wild 3-minute video.

“He approached me, he was flirting with me. … He was very adamant about being quiet right when we were, you know” and “made it clear” she “couldn’t stay over,” she alleged.

The user then claimed she “DMed” Susie Evans, and “never wanted to be caught in the middle of this.”

“I took a photo of the Uber that he called for me and it has the address,” Sasha added though noting she didn’t have any photographic evidence otherwise of the alleged hook-up.

The user captioned her video: “um so i think i just ended the bachelor’s marriage last night (i had no idea).”

Both Clayton and Susie, who won his tear-filled season in the end – chose to respond.

Clayton shared three Instagram Stories on Saturday after the bombshell video was posted, slamming them and taking out his phone.

He captioned the first one: “People that make these false allegations should be held accountable.

Trying to gain clout by ruining a relationship is embarrassing and extremely immature.”

The ABC star then filmed himself as he sat on his couch in a tee and shorts with his screen open.

“Let’s just make this as easy as possible,” he began.

“Coming to my system preferences … significant locations – I was at Mountainside Fitness last night, April 8, 7:07 to 8:12” he said on-screen, showing his phone and an Arizona gym.

Clayton continued to address the video head-on, with his screen showing “160” locations in the past two months.

He also turned to his brother Nate Echard and asked: “Have I not been with you the last two days?” who responded, “Yeah you have been.”

One contestant on Season 26 – the show’s most recent – Teddi Wright claimed one of Clayton’s brothers “DMed her” on the Women’s Tell All.

The star then dug his heels into his stance and shared DMs between him and the TikToker that took place on Instagram.

Showing his screen in his second Instagram Story, they had messaged.

Clayton showed he responded: “Good luck Sasha, hope you learned a valuable lesson through this. Not all publicity is good publicity.”

He then messaged her: “You said you met me in NY at 2am correct?”

“Ok well my video shows I was at an AZ gym at 8 pm MT,” Clayton responded.

He continued dropping time codes in his messages and said it “disproves” that they met at “2 a.m.”

He captioned the exchange which he shared to his 300K followers: “Someone take her phone. She keeps digging this hole.”

Season 18 alum Brandon Jones shared his own Instagram Story, calling out “clout chasers” per US WEEKLY.

And Bachelor in Paradise alum Noah Erb wrote in his own Story: “Poor girl needs to be told she was catfished.”

“But there’s more, I Facetimed him this morning [Saturday, April 10th].

“He was in the car with his brother on the way to the gym to play basketball.”

She also claimed the alleged photo of his phone she “was sent” had a different case on it.

“Also that just looks like a dusty crusty thumb and Clayton has nice hands” she joked.

One user defended on what seems like the social media puzzle piece for now: “We all knew Clayton was a kind soul who LOVES U!!!”

A third simply wrote: “I don’t even know what’s going on.”