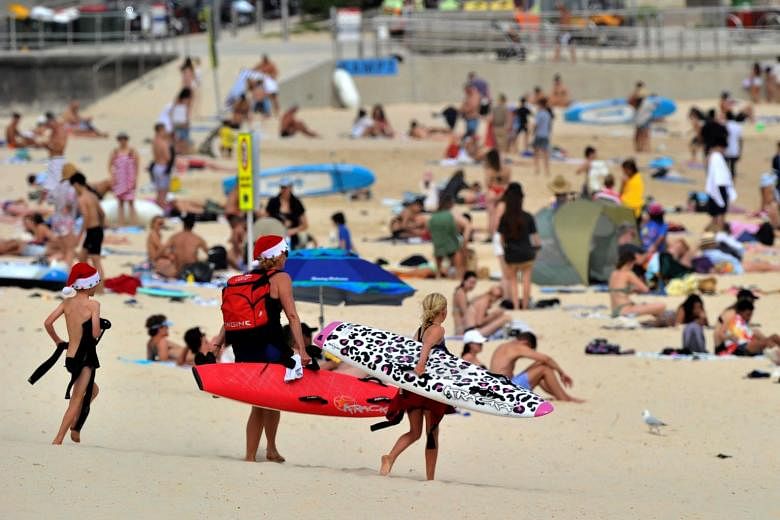 SYDNEY (BLOOMBERG) – Australia’s two most populous states reported a surge in Covid-19 infections, with New South Wales registering the most new cases in a 24-hour period since the start of the pandemic.

In New South Wales, where Sydney is the capital, 6,288 cases were reported on Christmas morning. Some 383 people are currently hospitalised with the virus in the state.

Further south, Victoria recorded about a third of the number with 2,208 new infections. Active case numbers in intensive care declined in both states.

With about 91 per cent of people 16 years and over double-dosed, Prime Minister Scott Morrison said lockdowns are no longer necessary. Delivering his annual Christmas message, the leader urged the nation to “overcome and to push through”.

“This pandemic, it continues to buffet us, the Omicron variant is just the latest challenge that we have faced,” Mr Morrison said.

Omicron is putting pressure on Australia’s push to fully reopen. Many testing centres have been overwhelmed this week as Australians travel interstate for the main summer vacation period, with daily cases hovering near record highs.

New South Wales said it will reintroduce patron number caps at hospitality venues from Dec 27 and along with Victoria have reinstated a mask requirement for indoor public spaces.

From Jan 4, Australians will be be able to get their booster shot four months after receiving their second dose, and from Jan 31, the gap will be cut again to three months.

Meanwhile, in the Victorian capital Melbourne, preparations are underway for The Ashes Test cricket match between Australia and England on Dec 26, where some 55,000 tickets have already been sold.

Patrons are being encouraged to carry masks and to “stay at least a couple of cricket bat’s length apart”.

Entry to the Melbourne Cricket Ground will only be granted to those who can supply proof of Covid-19 vaccination.

In Sydney, the Sydney Hobart Yacht Race is also set to start Sunday after being scuppered for the first time in its history due to the pandemic in 2020.