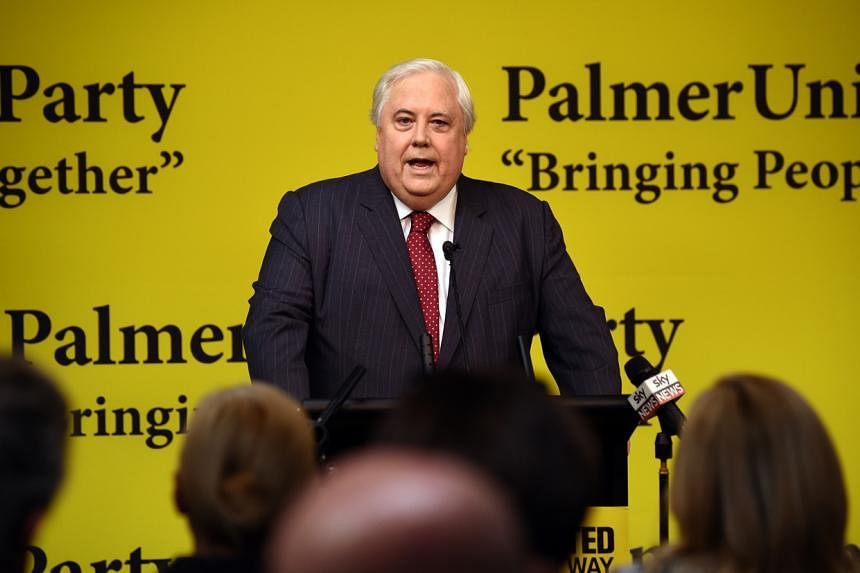 SYDNEY – Long before Australia’s election campaign officially began last month, the nation has been subjected to a relentless advertising blitz by a tiny political party that failed to win a single seat at the last polls.

In one of the more bizarre phenomena of modern Australian politics, the garish yellow advertisements of the United Australia Party (UAP) have filled newspapers, billboards and the Internet, as well as radio and television slots, for months.

The party, formed by maverick mining tycoon Clive Palmer, who made global headlines several years ago when he announced plans to rebuild the Titanic, is running a lavishly expensive campaign.

Ahead of the election on May 21, the UAP is set to spend more on advertising than the ruling Liberal-National Coalition or the Labour opposition party, even though it has no chance of forming the government and is expected – at best – to win one seat.

In his typically outspoken fashion, Mr Palmer, who is notorious for his grandiose promises, has claimed his party will triumph in the election.

Announcing in January that he will stand for an Upper House seat in his home state of Queensland, he promised the “largest and most expensive political campaign in the nation’s history”.

“I don’t have a budget,” he said. “We just respond to the political circumstance.”

Mr Palmer, 68, started out as a property developer but eventually became a billionaire through his mining empire, which has involved iron ore, coal and other resources.

He is believed to be worth more than A$13 billion (S$12.7 billion) and was ranked the seventh-richest person in the country last year by newspaper Australian Financial Review.

But he has always taken a strong interest in politics. He was closely linked for years to the rural-based National Party before forming his own party and getting elected as a Lower House MP in 2013.

As an MP, he famously once fell asleep in Parliament and reportedly missed more sessions than any other parliamentarian.

He rebooted his party ahead of the last election in 2019 and has become increasingly vocal during the pandemic over his opposition to lockdowns, border closures and vaccine mandates.

He wants to promote nuclear power, ban social media sites such as Facebook from imposing measures designed to prevent disinformation, and proposes capping home loan interest rates at 3 per cent for the next five years.

But none of these policies are likely to come to fruition. According to a new opinion poll conducted by Resolve Strategic, just 5 per cent of Australians plan to vote for the UAP.

It all may seem like yet another oversized folly from a figure who once built the world’s biggest dinosaur theme park – with 160 life-sized creatures – at his resort on Queensland’s Sunshine Coast.

But there may be method to his big-spending madness.

At the last election in 2019, he spent about A$83 million on his party’s campaign. Though his party won only about 3.4 per cent of the national vote, he took credit for helping the Coalition to clinch its narrow election win.

Mr Palmer claimed that his advertisements, which ferociously attacked Labour, helped to prevent a victory for Labour, which had been promising strong climate action and increased taxes on property investors – moves that he opposed.

His party also assisted the Coalition by recommending that its supporters list the Coalition as their second choice on voting ballots – a move that is significant because Australia has a preferential voting system.

Some commentators believe Mr Palmer’s advertising in the current campaign may soon start to target Labour as it did in 2019.

But he appears less supportive of the Coalition this time around and may stick to his current approach, which mostly involves attacking both major parties.

He has condemned the Liberal party for supporting Covid-19 lockdowns and for its massive spending to prop up the economy during the pandemic, which has left the nation with record debt.

Analysts believe Mr Palmer’s chances of winning a Senate seat at the election on May 21 are slim. But a loss is unlikely to end his political aspirations or persuade him to remain silent, even if he has to keep paying to be heard.