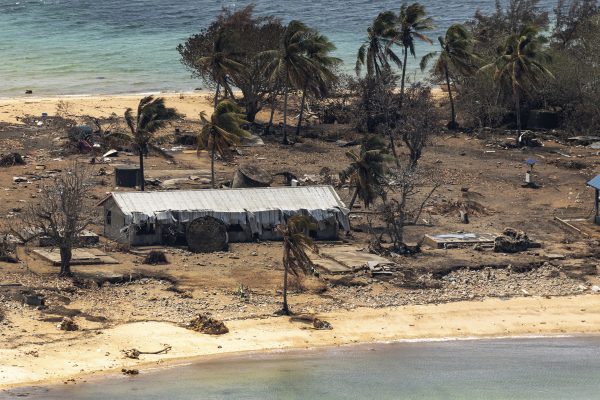 In this photo provided by the Australian Defense Force, debris from damaged building and trees are strewn around on Atata Island in Tonga on January 28, 2022, following the eruption of an underwater volcano and subsequent tsunami.

The volcanic eruption and subsequent tsunami that hit Tonga last month affected 85,000 people – about 85 percent of the population – cost the country $90 million, destroyed or damaged more than 600 buildings, and significantly impacted crops, livestock, and fisheries, according to the first impact report since the disaster.

The Hunga Tonga-Hunga Ha’apai eruption occurred on January 15, sending waves varying between 1 and 15 meters high across the island nation, leaving three people dead and cutting communication lines to the outside world for weeks.

As telecommunication lines have been re-established and aid agencies able to assess the damage, a clearer picture of the destruction has emerged. According to a World Bank impact report, the event has caused $90.4 million in economic damage. The overall economic losses will be much higher once follow-on losses – the consequence of disruption to tourism, commercial, agriculture and infrastructure activities – are accounted for.

“It is clear that Tongans will be dealing with the aftermath of this event for a long time,” he said.

In 2019, 20.6 percent of Tonga’s GDP came from tourism. Already economically devastated by the COVID-19 pandemic, Tonga was hoping for a tourism recovery once borders reopened, but the volcanic eruption has severely impacted the country’s tourism infrastructure, including privately owned structures such as resorts but also public spaces, walkways, moorings, and other associated infrastructure and facilities. The waterfront areas in the capital, Nuku’alofa, a key tourism attraction, has sustained extensive damage.

The impact of ashfall on agriculture was lower than expected, especially for root crops, but for some fruits and vegetables, such as bananas, pineapples, tomatoes, and watermelons, the damage was high. The World Bank said monitoring is required to see that subsistence farmers and households have enough produce over the coming months.

Despite efforts to deliver contactless aid, the first reported cases of COVID-19 in Tonga were confirmed shortly after aid began to arrive. Prime Minister Hon. Siaosi Sovaleni said Thursday that they had recorded 69 new cases, taking the total to 195 since the outbreak began.

Australia has so far provided AU$3 million in humanitarian funding and has delivered to Tonga more than 220 tonnes of emergency medical relief supplies, including shelter materials, water and sanitation supplies.

The New Zealand government has also provided NZ$3 million to Tonga in humanitarian funding and has crews assisting with the clean-up. An appeal for donations in New Zealand has raised more than $560,000, while New Zealand’s richest man, Graeme Hart, has donated 30 fishing boats, eight new tractors, and at least 10 containers of food.

China, France, Japan, the World Bank, and at least a dozen NGOs have also provided support.

Tonga is the most reliant country in the world on remittance inflows, with the equivalent of 37.7 percent of its GDP arriving in remittances in 2020. Tonga will therefore rely heavily on Tongans living abroad sending money home to fund the country’s recovery.