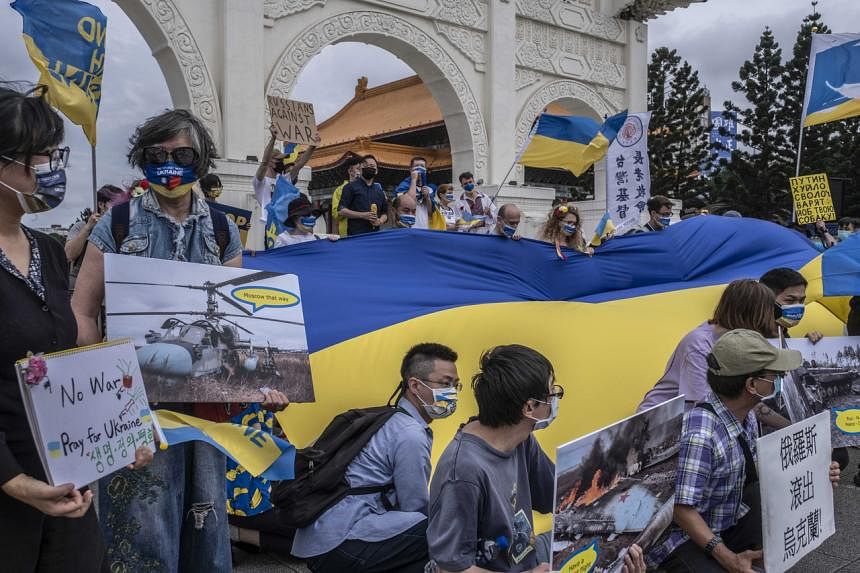 TAIPEI (NYTIMES) – Russia’s brutal war in Ukraine has jolted Taiwan into confronting the spectre of a sudden attack from the island’s own larger and more powerful neighbour: China.

The invasion has given new weight to the vision of China’s leader, Xi Jinping, who has long laid claim to self-governed Taiwan for the “rejuvenation” of China.

To many in Taiwan, Ukraine has been a lesson in the tactics and weaponry that could slow a more powerful invading force. It has also been a stark warning that the island may be inadequately prepared for a full-scale attack.

Taiwan’s defences are, by many accounts, ill-equipped and understaffed. Its president, Ms Tsai Ing-wen, has vowed to defend the island, but she has struggled to impose a new strategic vision on the uniformed leadership.

Taiwan spends billions on fighter jets and submarines, yet its conscripts barely get enough ammunition for training. The mandatory military service is seen by many as too short, and the reservist program, insufficiently rigorous. The military is building a professional force, but has struggled to recruit and retain highly skilled soldiers.

Now, Ukraine has been an impetus for change.

When Mr Wu Chiuan-syun, a computer engineer in Taipei, gathered with other army reservists in a dense, humid forest in central Taiwan in March, they trained longer and harder than soldiers like them had in recent years. Nearly every day, he said, his commanders would remind the men that the threat from China was growing.

“Ukraine showed us that you need to first show to others that you have the resolve to defend yourself; only then will others come and help,” Mr Wu, 31, said.

Underlying Taiwan’s defence dilemma is a question left unanswerable by design: Will the United States send military forces to Taiwan’s aid? In May, President Joe Biden suggested he would, but the United States offers no explicit security guarantees, a strategy it hopes will avoid either provoking Beijing or emboldening Taiwan to declare formal independence.

Mr Xi has said he seeks a peaceful unification with Taiwan, and he may be deterred by the huge economic and diplomatic blowback China would suffer for an invasion.

But China has also been pointed in its warnings. Its defence minister, General Wei Fenghe, said over the weekend that Beijing would “fight to the very end” for Taiwan. It is sending fighter jets toward the island almost daily – including 30 aircraft in one day last month alone.

The concern is that such manoeuvres could, intentionally or otherwise, be a prelude to conflict.

“We cannot wait; we are competing with time,” said Mr Michael Tsai, a former defence minister of Taiwan. “Russia’s invasion of Ukraine happened in an instant – who knows when the PLA might choose to invade Taiwan.”

Several military drills conducted in January were intended as a show of force to China – to demonstrate how Taiwan planned to stop invaders from intruding on its airspace, landing on its beaches and, in the worst case, taking over its cities.

At an air base in central Taiwan, a siren wailed, and within minutes pilots were taking off in F-16 fighter jets to ward off intruders. Off the northern coast, the navy debuted new mine-laying craft as two small warships fired live ammunition. In a southern city, smoke filled the air as soldiers practising urban combat shuffled past fake storefronts of bubble tea shops and cafes, exchanging gunfire with combatants.