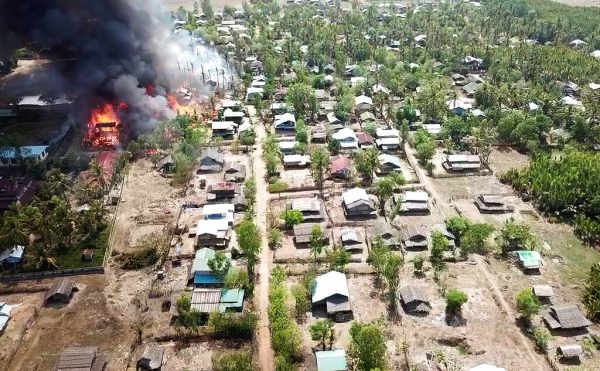 After 18 months of relative calm, thanks to an informal ceasefire brokered shortly before the February 2021 coup in Myanmar, Rakhine State appears to be edging ever closer to a return to war. The Arakan Army (AA), an insurgent group fighting for autonomy, and Myanmar’s military have clashed several times in recent weeks, most recently in Paletwa Township.

Just as concerning as these violent sparks is the rhetoric from both sides. AA leader Twan Mrat Naing recently tweeted an expletive-laden warning to the local military commander, and the group’s spokesman has warned of “another genocide” in Rakhine State – a reference to the military’s 2017 campaign against the Muslim Rohingya minority – but this time against the majority ethnic Rakhine population. Meanwhile, military spokesman Zaw Min Tun has said the AA is “inviting conflict,” and that if fighting breaks out, the military would not be the one to blame.

The November 2020 informal ceasefire, which ended two years of brutal fighting that left thousands dead and more than 100,000 displaced, is now at risk of collapse due to increasing tensions over the AA’s efforts to consolidate control over territory won in their earlier war.

For many in Myanmar, this is a welcome prospect. Indeed, there is a widespread hope that the AA, one of the country’s most powerful ethnic armed groups, will join the fight against the junta and help tip the balance in favor of anti-coup forces. With millions of people across Myanmar enduring horrific suffering at the hands of an illegitimate and brutal regime, this is an understandable sentiment.

But the consequences of renewed fighting would be devastating for Rakhine State’s estimated three million residents, both Rakhine and Rohingya. They have already endured many years of conflict and violence, and my recent research for International Crisis Group suggests that these communities are wary of a return to war.

It is also unclear whether a new war in Rakhine would actually hasten the end of the broader conflict in Myanmar, rather than simply open another tragic chapter. The military does not appear to have shifted significant forces from Rakhine to other theaters since the coup. Although it has been fighting on multiple new fronts, it still has capacity in reserve within Rakhine, and could therefore potentially take on the AA without demobilizing elsewhere.

The military would, however, be facing a very different opponent than during the first war, when the AA was a nascent insurgent force staging guerrilla attacks. Not only does the pro-Rakhine armed group now have many more soldiers under arms, it has also made significant progress in consolidating control over rural areas of central and northern Rakhine State since the November 2020 ceasefire. Building on its already strong support among ethnic Rakhine, the group has transformed from an armed force into a state-like entity, with an administrative network delivering public services, a functioning judiciary, and its own police force.

The AA administration, known as the Arakan People’s Authority, now de facto governs perhaps two-thirds of central and northern Rakhine State. Within just a couple of years, the group’s governance apparatus has begun to resemble those of much more established ethnic armed groups that have long administered sizeable territories within Myanmar, such as the Karen National Union, in the southeast, and the Kachin Independence Organization in the country’s north. Just as these groups have done, the AA has used service delivery to enhance its legitimacy and build popular support.

The AA models itself most on the United Wa State Army, another powerful ethnic armed group based along Myanmar’s northeastern border with China, that enjoys near-total autonomy over a vast territory.

The AA’s attempt to create a similar enclave in Myanmar’s west is putting it on a collision course with the military. The recent tensions stem from the regime’s efforts to push back against the ethnic armed group’s growing clout, particularly as the AA expands into southern Rakhine and along the border with Bangladesh.

If the AA does return to war with the regime, it is unlikely to do so out of solidarity with the anti-coup movement. The group is squarely focused on its objective of achieving autonomy, and despite some recent engagement remains highly distrustful of the National Unity Government, the parallel administration formed by lawmakers from Aung San Suu Kyi’s National League for Democracy (NLD) party after the coup. While many in Myanmar hope the AA will join the fight against the junta, the reality is the group is still angry about the NLD’s backing of the military’s earlier campaigns in Rakhine.

The AA also has not yet bought in to the opposition National Unity Government (NUG)’s promise of a federal system in Myanmar – one in which ethnic minorities would be granted much greater autonomy. The Arakan Army’s objective remains achieving near-total control over Rakhine State, something NUG officials have been reluctant to accept, because it would go beyond what they have promised to other ethnic armed groups.

The AA’s attempts to secure autonomy do not mean war with the military is inevitable, however. While tensions are certainly rising in Rakhine, both sides have good reasons to at least try to maintain the status quo, if not strengthen the existing ceasefire.

Renewed conflict in Rakhine may not be an existential threat to the regime, but it would nevertheless create significant political and military challenges. Not least of all, it would undermine coup leader Min Aung Hlaing’s recent peace initiative, which has seen him declare 2022 a “year of peace” and invite ethnic armed groups to Naypyidaw.

For the AA, a new conflict would put at risk much of what it has achieved over the past 18 months. Despite strong public support for the group, its governance system is still embryonic and could crumble under the pressures of renewed war.

Ultimately, it is up to the AA’s leaders to decide on the best strategy to achieve their political ambitions. So far, they have shown themselves to be savvy political operators, building one of the biggest and most powerful ethnic armed groups in Myanmar in barely a decade.

But if war is to be averted, they may need to act soon. Joining the regime’s disingenuous peace initiative would lend undeserved legitimacy to both the process – which is mostly intended to keep armed groups from working with the NUG – and the regime more broadly, and should be avoided. But this would not preclude the AA and the regime from engaging in low-profile talks aimed at avoiding a war that neither of them has good reason to want.

However unpopular it may be with Myanmar’s resistance forces, the best way to ensure a new war does not break out in Rakhine may well be to formalize the current ceasefire, including demarcating territory, in order to avoid further clashes that could quickly escalate into a conflict worse than the one which ravaged the state from 2018 to 2020.

For more on this topic, please refer to International Crisis Group’s recent report, “Avoiding a Return to War in Myanmar’s Rakhine State.”