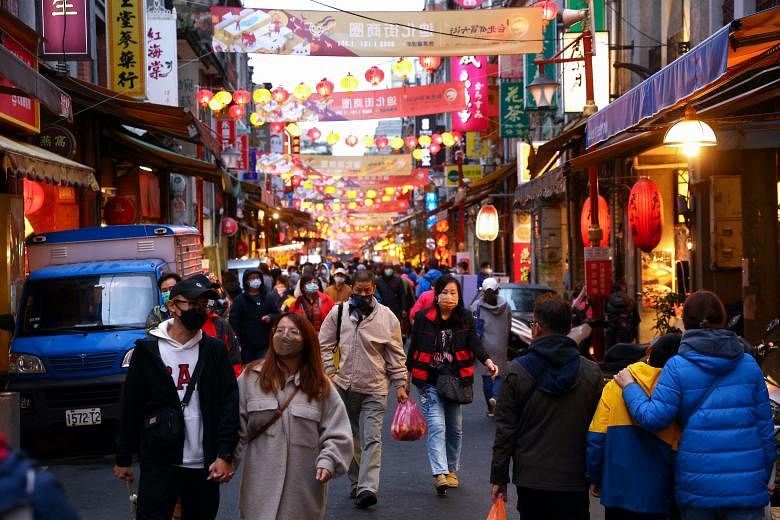 TAIPEI – Taiwan’s zero-case policy in dealing with Covid-19 has drawn doubts and criticisms about its practicality in recent months, as many countries enter the third year of the pandemic treating the virus as endemic and opening their borders.

In January, when asked about the next steps in containing Covid-19 amid a surge of local infections, Health Minister Chen Shih-chung said: “The goal is still to get back to zero.”

While he admitted that it was difficult and may not be achievable, he said Taiwan will do its best and get as many vaccinated as possible.

He added that it was not an option for Taiwan to coexist with the virus the way some countries are doing by scaling back on most restrictions.

That same month, Premier Su Tseng-chang cautioned that while the health authorities were working hard to reduce the number of cases, the island may have to be open to the idea of treating the virus as endemic.

The strict policy has kept the number of Covid-19 infections and deaths low in Taiwan. As at Saturday (Feb 12), there were 19,567 cases and 851 deaths.

The zero-case strategy has been in place since the pandemic spread to Taiwan in January 2020.

For those looking to travel for leisure or business, the island is one of the hardest places to enter in the age of Covid-19.

In Bloomberg’s Covid Resilience Ranking, updated on Jan 26, Taiwan ranks 50 out of 53 economies in terms of vaccinated travel routes, ahead of only China, Vietnam and the Philippines.

Finland, Spain and Switzerland are in the top three spots. According to Bloomberg, “the scores of the top-ranked places generally reflect a best-case scenario of high vaccination rates, relatively controlled death levels, flight capacity recovering to pre-pandemic levels, and few travel curbs on vaccinated people”.

While Taiwan’s two-dose vaccination rate has surpassed 70 per cent, some 60 per cent – or 90 flight routes – of its cross-strait and international flights have been put on pause indefinitely since the pandemic started.

Only Taiwanese and a selected number of international students, foreign spouses and their children, as well as migrant workers from Indonesia and Thailand, are allowed into the island.

As at this month, it still mandates a two-week quarantine at a hotel or a facility, followed by a week-long “health monitoring period” when travellers are advised to stay home.

This has brought down drastically the number of foreign visitors, causing some hotels to cease operations, and tour operators to target local tourists.

In just the first six months of 2020, Taiwan saw a nearly 82 per cent drop in foreign visitors compared with the same period in 2019.

Critics say the zero-case policy is no longer realistic, given the high transmissibility of the Omicron variant.

“With rapid tests, vaccines and medication to combat the virus, it’s no longer realistic to strive for zero cases. (Taiwan) should prepare to coexist with the virus,” epidemiologist Chen Chien-jen, who is Taiwan’s former vice-president, said in January.

“Reducing cases to zero is a very extreme goal,” said Mr Han Yang, a researcher from the Institute of Economics at Academia Sinica.

He worries that extreme goals like this will cost Taiwan a heavy price, and hopes for the island to shift its perspective in dealing with the virus.

As South-east Asian countries like Cambodia, Thailand and Singapore relax their border restrictions and open vaccinated travel lanes, Taiwan’s strict border control may thwart investors’ plans to take their funding and manufacturing to the island and prompt them to consider countries that have opened their doors to improve the economy.

Various chambers of commerce in Taiwan have come forth with suggestions on how the island could protect its economy from further hit, top of which is the easing of border controls.

The American Chamber of Commerce in Taiwan published its 2022 Business Climate Survey in January, citing “confidence… about Taiwan’s economic prospects over the next three years”, but also pointing out that “the reopening of Taiwan’s borders is a pressing issue for most companies”.

The European Chamber of Commerce Taiwan’s 2022 Position Papers suggested that “border restrictions should be phased out gradually”. It urged the government to “establish clear entry criteria to allow businesses to sustain business operations and talent circulation”, rather than review visa applications on a case-by-case basis.