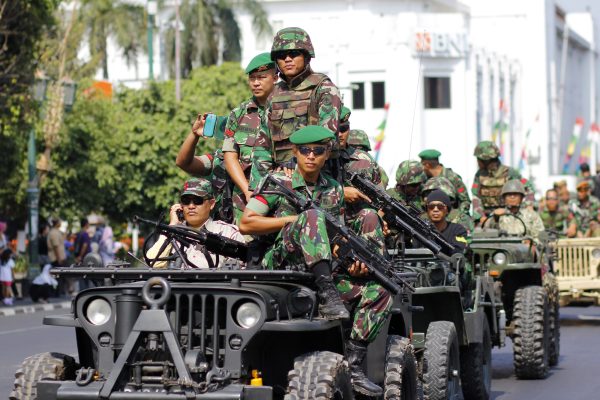 Indonesia’s current administration is racing against time, with only two years to complete the planned modernization of the Indonesian National Armed Forces (TNI). As it stands, the government will struggle to achieve the Minimum Essential Force (MEF) target by the end of its current term in 2024, and to develop a program that will succeed it. As of 2021, the government had only realized 65 percent of its MEF target, and TNI Commander Gen. Andika Perkasa estimates that the MEF will only be 70 percent complete by 2024, a similar prediction to other observers. The delay of the modernization plan can be explained by two main factors: budget constraints and political uncertainties.

Based on the original 2020-2024 Strategic Planning document, the Ministry of Defense is supposed to receive an allocation of $20.7 billion in external loans during this five-year period, most of which will be used to procure major weapon systems from abroad in order to meet the MEF target. However, according to sources, in the last two years, the Defense Ministry received only around $7.8 billion from the Ministry of Finance.

Meanwhile, President Joko “Jokowi” Widodo’s administration is preparing to face prolonged and more severe commodity price shocks, which have already resulted in a swelling subsidy budget. This has forced the government to cut the budget of all ministries and government institutions by a total of $1.68 billion and proposed to the Indonesian parliament to increase the annual subsidy budget by more than 2.5 times next year to around $35.3 billion. In addition, the administration is still trying to find enough money to fund the US$32 billion new capital city project in East Kalimantan.

Nonetheless, the shrinking fiscal space has not stopped the Ministry of Defense from “fighting” for what it sees as a much-needed modernization program. Last year, Defense Minister Prabowo Subianto revealed that the president has instructed him to create a defense master plan for the next 25 years that would also include greater investment in arms procurement. Shortly afterward, a draft of a Presidential Regulation revealed that the ministry was planning to submit a proposal for $125 billion in foreign loans to support the modernization and maintenance of TNI’s weapon system until 2044. Eventually, the proposal seems to have been put on the shelf (if not rejected) and the discussion about the fate of TNI’s modernization plan has only received new momentum this month as the administration has begun unveiling its Fiscal Year (FY) 2023 budget requests.

During a hearing in parliament on June 6, the Ministry of Defense requested a total of $21.8 billion, a figure that is 2.5 times larger than the original proposal and represents a 138 percent increase compared to FY 2022. Two days later, the ministry announced that it would accelerate the revision of its foreign loan allocation.

The modernization plan may also face political challenges. In general, the Indonesian government has always enjoyed the support of the majority of the public when it comes to arms modernization. However, as the country’s economy has yet to fully recover from the ongoing COVID-19 pandemic and the growing geopolitical turbulence, both the Ministry of Defense and TNI need to work extra hard to convince the public and decision-makers on the urgency of forming another major arms modernization program.

Furthermore, as a chairperson of a political party, Prabowo might soon begin to focus on his expected campaign for the 2024 presidential election. With this in mind, observers have been arguing that the MEF and post-MEF programs might no longer be among his top priorities. Meanwhile, as some experts have pointed out, if Prabowo stays in office while campaigning for high office, conflict of interest questions might arise if the public suspects that his request for extra defense funding is connected with his political ambitions. On the other hand, if a change of leadership occurs within the ministry, Prabowo’s replacement might not be as ambitious and politically well-established to resolve all the problems and complexities of the modernization plan within the short window of time before 2024.

The delay in the fulfillment of the MEF target has also hampered the advancement of Indonesia’s domestic defense industry, which relies heavily on foreign arms procurement to master new technologies. For instance, through the joint development of the KF-21 Boramae fighter and procurement of the French Rafale jet fighter, PT Dirgantara Indonesia (PT DI) is expected to gain, among other things, composite material and flight simulator technologies to help the company develop its indigenous N219 Nurtanio light turboprop aircraft.

Moreover, the agreement between that state-owned defense company PT PAL and the French shipbuilder Naval Group to build at least two Scorpene-class submarines in Surabaya, East Java, will make it easier to ensure that the country obtains the maximum economic benefits, in terms of both technology transfer and job creation. The deal will also strengthen Indonesia’s position as the only country in Southeast Asia capable of building submarines domestically, and the navy’s status as one of the oldest and most experienced submarine operators in the region.

Similarly, the agreement on joint production of medium tank and amphibious assault vehicles between the Indonesian state-owned enterprise PT Pindad and the Turkish firm FNSS should allow the former company to build more complex and powerful land platforms. However, without support from the government – particularly in terms of budget support – it might be challenging to benefit both the end-user and the domestic defense industry. This will go against the current administration’s own ambition to turn defense spending into defense investment. Additionally, budget restrictions should drive the government to be even more selective in choosing the best bids, which not only suit TNI’s operational requirements but also support the need to have a more profitable defense industry.

All that being said, it is difficult to forecast what will happen with the MEF plan over the next two years. In the meantime, the administration might need to figure out how to finance all of the arms procurement programs that have been signed and/or announced in the past years in light of the budget constraints imposed due to fiscal and political uncertainties. Failure to save what it is left from the MEF and determine its successor program in the next two years could further exacerbate the already sorry state of the armed forces and stall the betterment of a domestic Indonesian defense industry.

The views expressed in this article are personal.