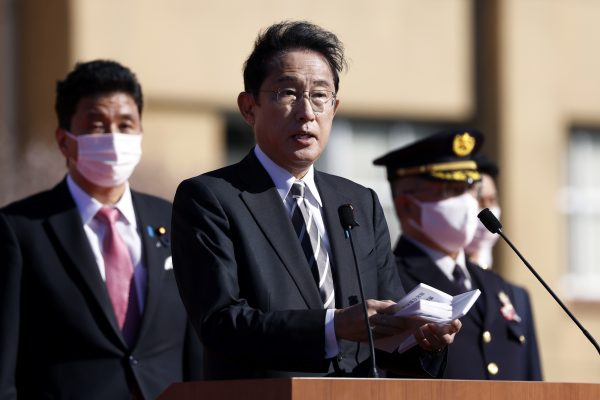 In 2022, the government of Japanese Prime Minister Kishida Fumio will consolidate two major policies that together with guide Japan’s future foreign policy. One is the economic security bill. The other is the foreign and security policy developed on the basis of three strategic documents, the National Security Strategy (NSS), the National Defense Program Guidelines (NDPG), and the Medium Term Defense Force Buildup Program (MTDP). The economic security bill has already been considered by a committee of experts and is now in the legislative drafting process. Of the three strategic documents, the administration has begun consulting experts and plans to have revisions to the NSS done by the end of the year.

The NSS is the most important of the strategic documents, with particular import for Japan’s foreign policy. Given the profound changes in the global landscape since the strategy was first formulated in 2013, notably the growing influence of China, attention is focused on how the NSS will be revised, or not as the case may be.

The NSS formulated in 2013 states that “Stable relations between Japan and China are an essential factor for peace and stability of the Asia-Pacific region.” Based on this recognition, the document further states that “from a broad, as well as a medium- to long-term perspective, Japan will strive to construct and enhance a Mutually Beneficial Relationship Based on Common Strategic Interests with China in all areas, including politics, economy, finance, security, culture and personal exchanges.” More specifically, the NSS states that “Japan will continue to encourage China to play a responsible and constructive role for the sake of regional peace, stability and prosperity, to adhere to international norms of behavior, as well as to improve openness and transparency in its advancing military capabilities through its rapidly increasing military budget.” This is, in essence, Japan’s strategy of engaging with China.

The question is whether the NSS that is produced in 2022 will truly maintain the same “Mutually Beneficial Relationship Based on Common Strategic Interests.”

In fact, the attitude toward China expressed in the 2013 document is that “there is an expectation for China to share and comply with international norms, and play a more active and cooperative role for regional and global issues. On the other hand, China has been rapidly advancing its military capabilities in a wide range of areas through its continued increase in its military budget without sufficient transparency.” This is widely understood, as is the fact that China “has taken actions that can be regarded as attempts to change the status quo by coercion based on their own assertions, which are incompatible with the existing order of international law, in the maritime and aerial domains, including the East China Sea and the South China Sea.” The document notes that “China’s external stance and military activities, coupled with a lack of transparency in its military affairs and security policy, have become an issue of concern to Japan and the wider international community; therefore, Japan needs to pay careful attention to this situation.” However, the situation has moved beyond the stage where paying careful attention will suffice. On the Taiwan Strait, for instance, the 2013 document comments on the strengthening of cross-strait economic ties, noting that “cross-strait relations contain both orientations toward stability and potential instability.” This attitude toward China in respect of the Taiwan Strait also differs from the current situation.

The Kishida administration is calling for an approach in which Japan deals with China based on the merits of right or wrong. Within this approach, the aspect of military security belongs on the side of “wrong.” The revised NSS may include a strategy for engaging with China based on recent discussions at the Quadrilateral Security Dialogue (Quad) and other forums. However, given that celebrations marking the 50th anniversary of the normalization of Japan-China relations are set to take place in September 2022, and given that the items in the 2008 Joint Statement are mutually agreed between Japan and China, it is difficult for either side to unilaterally abandon the NSS.

As such, Kishida will face a tough decision on how to express Japan’s posture on China and how to describe its future policy on relations in the revised NSS. If Japan were to simply add its attitude and policies toward China within the current framework of the U.S. and its allies to the NSS without modification, it would conflict with the existing Mutually Beneficial Relationship Based on Common Strategic Interests. So there is hesitancy about writing this into the document as the basis for the current and future bilateral relationship.

In the 2008 Joint Statement, Japan and China “recognized that […] Japan and China now have great influence on and bear a solemn responsibility for peace, stability, and development of the Asia-Pacific region and the world,” and that, “Japan and China “[…] would align Japan-China relations with the trends of international community and together forge a bright future for the Asia-Pacific region and the world while deepening mutual understanding, building mutual trust, and expanding mutually beneficial cooperation between their nations in an ongoing fashion into the future.”

The question is how to reconcile this with the principles of a Free and Open Indo-Pacific and the Quad. Ultimately, Japan will likely opt to use “safe” expressions, but it will need to think carefully about how it assembles its words.

KAWASHIMA Shin is a professor at the University of Tokyo.