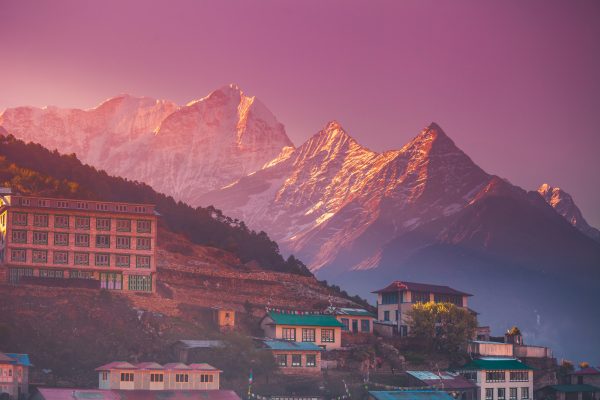 They are tall and tacky – and mighty popular among the TikTok crowd.

As Nepal heads into local level elections scheduled for May 13, the ubiquitous “view towers” (up in the mountains) and “welcome gates” (down in the plains) are being repeatedly cited in Nepali media as markers of local governments’ profligacy. The local bodies are apparently competing to build these eye-catching structures that otherwise offer no tangible benefits to their citizens.

The functioning of the local governments is under scrutiny ahead of the vote.

As many as 17.7 million eligible voters will be casting their ballots to elect leaders to 753 local level units: six metropolises, 11 sub-metropolises, 276 municipalities, and 460 rural municipalities. As people have direct stake in local governments, there is palpable excitement in the air.

The 2015 constitution of Nepal instituted a three-tier federal structure, with each of the federal, provincial, and local level units functioning autonomously. One of the big criticisms of the earlier unitary structure – in place since the advent of democracy in 1951 – concerned the centralization of powers and resources in Kathmandu, the national capital.

But even under the unitary dispensation, community-level governance in Nepal was decent enough, albeit without the desired level of autonomy. At the top of the political hierarchy was the hereditary monarch, whose legitimacy rested on having good relations with his people. For this he cultivated local elites to rule on his behalf.

The Nepali monarch had ruled with absolute authority after King Mahendra’s 1960 coup, and the party-less Panchayat system he instituted would endure for the next three decades.

“Nepal’s monarchy was authoritarian rather than totalitarian,” said Hari Sharma, a political analyst. As its authority rested on its ability to connect with the grassroots, “even in the party-less system, the monarch had an interest in hearing and addressing people’s basic demands.”

Following the restoration of democracy in 1990, the first nationwide local elections were held in 1997. Then the Maoist rebellion started and it would be 20 years before another round of local polls could take place, this time under a new constitution that heralded a federal republic and its three-tier system of government.

So how have Nepal’s local governing units, which have always been closely connected with people’s daily lives, fared under the new political dispensation?

“The past five years have helped lay a solid foundation for strong and autonomous local governance,” said Khim Lal Devkota, a researcher on Nepal’s local governance. “For the first time, the rights centered in Singha Durbar [the federal secretariat] have been delegated to the grassroots.”

Citing surveys that show people’s higher confidence in local governments compared to their trust in provincial or federal governments, Devkota said there is plenty of room for optimism.

For instance, although the federal government was solely responsible for the management of the COVID-19 pandemic, it was the municipalities and rural municipalities that did most of the work, building isolation centers, providing timely medicines, and regularly calling on the infected. Without functioning local governments, deaths from the pandemic would perhaps be much higher than the 12,000 recorded thus far.

In fact, there is no shortage of positives.

People who previously had to travel hundreds of kilometers for even basic services like citizenship and death certificates can now get them at their doorsteps.

“In these five years, we have gained invaluable experience,” said Prabha Baral, a woman mayor of Rapti Municipality in western Nepal.

Asked if she will again be running for the mayor’s post in the upcoming local elections, Baral replied: “They say you should not repeat the same grade. Now I consider myself ready for bigger responsibilities.”

Yet Baral is a rare woman mayor in Nepal. In the 2017 elections, men won 98 percent of the chief positions of mayors and chairpersons; women won 91 percent of deputy positions.

In Nepal, each political party must field candidates of different genders for the top two local level posts. In a still largely patriarchal society, mostly men were chosen as the main candidates while women were picked to work as their deputies.

The local bodies are highly politicized, too, and constant tussles between the chiefs and their deputies – partly because male leaders often question the competence of their female deputies – have hampered service delivery. Pervasive corruption is another drag on their smooth functioning.

Chandra Kishore, a veteran journalist, flags some other problems seen in the new local bodies.

“The concept of ‘small is beautiful’ should inform local governance. But our local units are too big in terms of population,” he said, citing the 22 most densely populated Nepali districts in the plains. “This in turn has harmed service delivery and reduced the representation of minorities.”

He speaks of how the charged political climate at the local level, mostly dominated by caste elites, has divided families and sowed social discord.

But that is just one side of the larger story of local government in the past five years.

Hom Narayan Bhandari, chairman of the National Association of Rural Municipalities, said even with their limited powers and resources, the local bodies have done an incredible job. “Remember, five years ago, we had to start from zero and build everything ourselves, starting with the houses for our offices,” he said.

The new constitution saddled local units with a raft of duties, but the federal government was reluctant to equip local units accordingly, Bhandari complained. For instance, most local offices are understaffed in the absence of laws to hire civil servants and police officials.

The local leaders also resent always having to “beg” the federal government for more power and resources.

“The federal officials act as if they are doing us a favor. This is not how a federal system works,” Bhandari said.

Then there are the jurisdictional disputes among local representatives. To give one example, the vice-chairpersons of rural municipalities preside over meetings to settle local level disputes. But in the absence of clear demarcation of duties, the chairpersons often meddle in such meetings.

It is not just the local leaders who are to be blamed, though. There are also signs of immaturity on the part of the electorate.

Radheshyam Adhikari, a leader with the Nepali Congress, the country’s ruling party, said that even though local representatives work closely with the people, more often than not, their competence and local nous matter less than their political affiliation.

“We have a highly politicized society,” he said. “In 70 percent of the cases, people will blindly vote for the candidates of their preferred parties.”

Elections have also become expensive. Around 70 billion Nepali rupees ($600 million) were spent in the last local elections. Although the Election Commission has this time set a spending cap on poll campaigning – 750,000 rupees for mayoral and deputy mayoral candidates – actual spending could be magnitudes above that figure. Poorer prospective candidates are being booted out of the field.

Just as worryingly, this time, the representation of women and minorities could go down if political parties jointly fight elections by forming coalitions, as seems likely. While a party must field chief and deputy candidates of different genders, the same rule does not apply to a coalition of parties.

But irrespective of who gets elected on May 13, there is bound to some improvement in local-level functioning.

To increase their accountability, a digital system is being developed to track the work of local governments in real-time.

Fiscal federalism expert Devkota reckons that as many politicians have now come to see local politics as a stepping stone to national politics, competition among local bodies will intensify, further improving the quality of their work – and not just on view-tower construction. This in turn will build pressure on the federal government to come up with timely laws and to adequately fund and empower local bodies.

“Our local units have stumbled in some areas,” Devkota said. “Yet they have also made great progress in other areas. I choose to see the glass as half-full.”

The spate of view tower and welcome gate building will not stop. But given the novelty of the federal project in Nepal and the many constraints local representatives had to work with, it would be unfair to see these vanity projects as the only measure of their success.